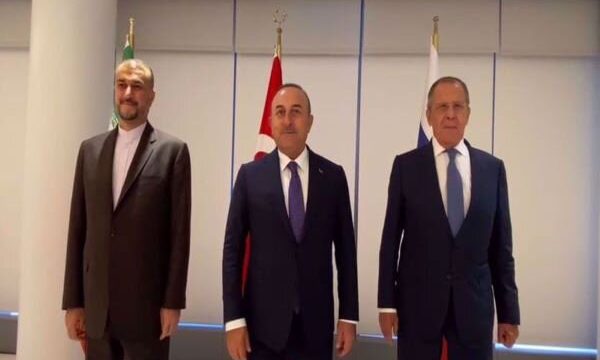 Iran, Russia, and Turkiye have held a trilateral meeting on Syria in the Astana Format amid ongoing diplomatic efforts to find a political solution to the crisis in the war-torn Arab country.

UN Special Envoy for Syria Geir Pedersen was also present at the talks, which took place at the Turkish Embassy, near the UN headquarters.

Speaking at the event, AmirAbdollahian reiterated that there is no military solution to the Syrian crisis, adding that the conflict must be resolved peacefully and in accordance with the principles of international law.

He also emphasized that the withdrawal of all foreign forces from Syria, the end of the occupation, and full respect for the country’s sovereignty and territorial integrity are essential prerequisites for achieving this goal.

The top Iranian diplomat further highlighted the need for the removal of sanctions on Syria and increased humanitarian assistance to the Syrian people, given the negative impact of sanctions on ordinary people and the economic situation in the country.

At the end of the summit, the foreign ministers once again reaffirmed their strong commitment to the sovereignty, independence, and territorial integrity of Syria.