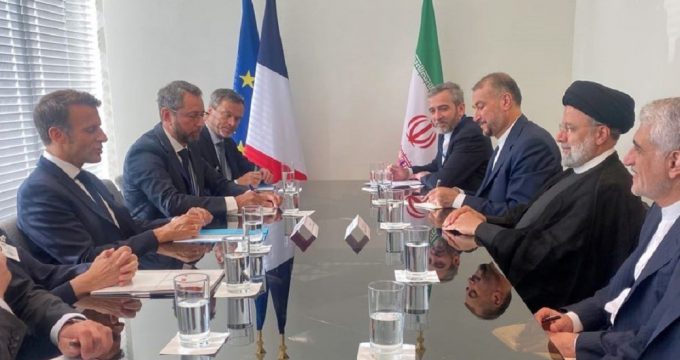 Meeting his French counterpart, Iranian President Ebrahim Raisi hits out at the European countries for having pursued a resolution against Tehran’s nuclear program at the UN nuclear watchdog amid diplomatic efforts aimed at reviving the 2015 agreement.

Raisi sat down for talks on Tuesday with French President Emmanuel Macron on the sidelines of the 77th session of the United Nations General Assembly in New York.

During the talks, the Iranian president described the outstanding issues between Iran and the International Atomic Energy Agency (IAEA) as a “serious obstacle” to a final agreement on the restoration of the 2015 deal.

“The Agency’s approach to issues should be technical and free from the other parties’ pressures and influence. We believe it is not possible to reach an agreement without the closure of Iran’s dossiers” at the IAEA, Raisi added.

He criticized a move by France, Germany and the UK — the three European signatories to the Iran deal — for having called for the adoption of a resolution at the latest meeting of the IAEA’s Board of Governors earlier this month, describing it as an “unconstructive” approach that further complicates the matters.

The Europe-sought resolution, however, did not garner enough support at the meeting. The Board instead passed a statement critical of what it called Tehran’s lack of cooperation with the Agency.

“With its inspection and supervision, the IAEA officially admitted 15 times that Iran’s activities lie within the commitments and far from any diversion,” he said.

The Iranian president further noted that the agency’s dual approach to the destructive nuclear activities of the Israeli regime is a sign of a “politicization” of matters.

On Monday, France said it seeks to persuade Iran to accept Europe’s proposals to revive the historic nuclear deal, known as the Joint Comprehensive Plan of Action (JCPOA).

In a phone conversation with Macron, Raisi had already criticized the US for abandoning the accord and re-imposing sweeping sanctions against the country, saying Washington has clearly violated its commitments under the nuclear deal.

He also emphasized that the US and European countries must implement their commitments under the JCPOA, stressing that “In any negotiation, the rights of the Iranian nation should be secured and guaranteed.”

Raisi, in an interview with CBS News’ “60 Minutes,” also said he was open to a “good” deal but pressed for guarantees from Biden that the United States will not again leave the accord under a future leader.

Macron has held several telephone conversations with his Iranian counterpart Raisi over the issue in recent months.

On Monday, he underlined that there would not be a better offer for Iran to revive a nuclear deal with world powers and it was up to Tehran to make a decision now.

Iran has highlighted that it is committed to continuation of negotiations and willing to help formation of a “strong and sustainable” agreement.

Raisi left Tehran for New York on Monday morning, where he will deliver a speech at the UN General Assembly later this week.

The Iranian president has said he will use the opportunity to explain the Islamic Republic’s standpoints and perspectives during his visit and address to the UN session.

He is also set to hold talks with heads of states attending the meeting as well as international figures.

The United States, under former president Donald Trump, abandoned the Iran deal in May 2018 and reinstated unilateral sanctions that the agreement had lifted.

In recent weeks, there have been unfruitful, indirect exchanges of responses between Tehran and Washington over an EU draft proposal on restoring the JCPOA, with Iranian officials urging their American counterparts to show “realism” and “flexibility” in order to secure a deal.

European diplomats say talks now appear headed toward a stalemate until after the US mid-term elections on November 8.