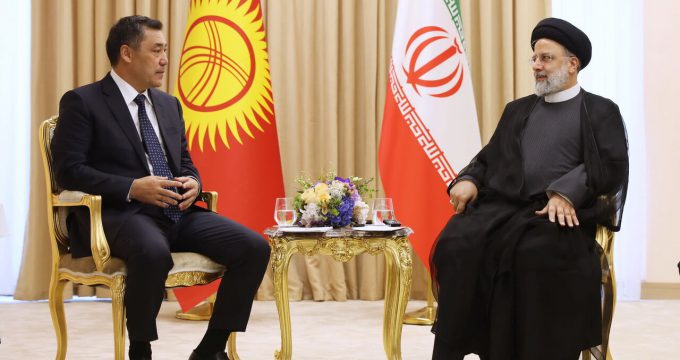 President Ebrahim Raisi said on Thursday that Iran has achieved great progress in technical and scientific fields despite existing sanctions, and is ready to share its experiences with Kyrgyzstan.

President Raisi made the remark in a meeting with his Kyrgyz counterpart Sadyr Japarov on the sidelines of the Shanghai Cooperation Organization’s summit in Uzbekistan’s southeastern city of Samarkand.

Raisi referred to historical, cultural and civilizational bonds between Iran and Kyrgyzstan, calling for stepping up efforts to boost economic relations.

He said that the two sides can also promote their regional cooperation with the participation of other countries such as Uzbekistan, Tajikistan and Turkmenistan.

Japarov, on his part, said that the expansion of ties with the Islamic Republic of Iran is among the priorities of his government.

He stressed the importance of promoting bilateral cooperation in the transit sector, and called for speeding up efforts to complete a railway construction project between Iran’s southern port city of Bandar Abbas and the Central Asia.

The Kyrgyz president said that the project plays a key role in expanding economic cooperation between Iran, Turkmenistan, Uzbekistan and Kyrgyzstan.

Japarov also thanked Iran for providing medical assistance to his country during the Covid pandemic.