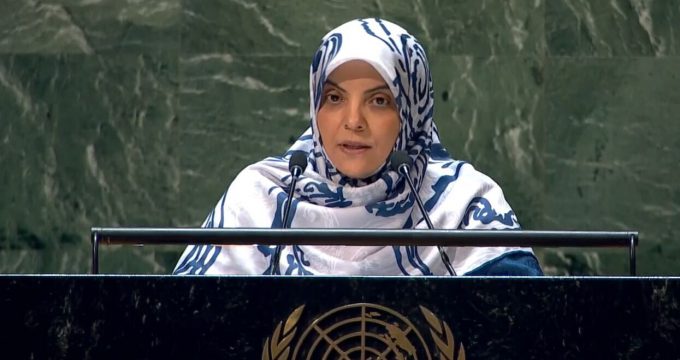 Iran’s Ambassador and Deputy Permanent Representative to the United Nations Zahra Ershadi said that moratoria to stop nuclear tests does not substitute a legally binding obligation.

Ershadi was speaking at the High-level Plenary Meeting of the United Nations General Assembly on the International Day against Nuclear Tests.

She underlined that it is noteworthy that the moratoria to stop nuclear tests does not substitute a legally binding obligation. Therefore, pending the achievement of this goal, besides the implementation of these moratoriums by the NWSs, consequently, should be replaced by a legally binding instrument to effectively prevent such tests.

The following is the full text of the Iranian envoy’s speech at High-level Plenary Meeting of the United Nations General Assembly:

In the Name of God, the Beneficent, the Merciful

We would like to extend our appreciation to you for convening this meeting of the General Assembly. We commend Kazakhstan and share its position for the promotion of the International Day against Nuclear Tests.

In fact, 26 years after the signature of the CTBT, the world has yet to witness the implementation of the Treaty. As stipulated time and again, the international community has been and continues to be adamant about ending nuclear tests. Thus, it goes without saying that achieving this noble goal relies on the political will of the Nuclear Weapon States, in particular.

Iran shares the same frustrations of non-nuclear weapon States on any pretext, therefore any delay in ending the nuclear test(s) which in turn magnifies the loss of the momentum for advancing this cause at the 10th NPT Review Conference. Should these calls be effective, these ominous tests would not have been utilized for the production, proliferation and even use of nuclear weapons. After all, the world, including the NWSs, should have taken note of the devastating consequences of nuclear tests that are nearly identical to the actual use of nuclear weapons. The statistics, namely about 2,000 tests wherein half belong to the US, are shocking to say the least.

Like many other nations, Iran believes that a meaningful measure towards relinquishing the world from any threat of nuclear weapons is the immediate implementation of Article VI of the NPT, once again as the sole responsibility of the NWSs. Therefore, the international community must hold the NWSs responsible and accountable by implementing this legal obligation and refrain from any activity inconsistent with that obligation. This approach should also apply to the Middle East where the Israeli regime, as the sole possessor of all types of WMDs, poses the most serious threat to regional peace, security and stability.

It is noteworthy that the moratoria to stop nuclear tests does not substitute a legally binding obligation. Therefore, pending the achievement of this goal, besides the implementation of these moratoriums by the NWSs, consequently, should be replaced by a legally binding instrument to effectively prevent such tests.

Today, we should highlight the importance and necessity of putting an end to all nuclear tests for not only the sake of humanity and its future generations but also mother Earth. The very survival of humankind depends on our own an unshakeable agreement that nuclear weapons should never be tested, developed and deployed; rather, they ought to be destroyed altogether.

The TPNW is the right step in the right direction, and we hope to see a day where it is brought to fruition with the proper steps, including prompt commencement of the negotiations, in the CD for a comprehensive convention on nuclear weapons spanning the whole cycle of these inhumane weapons while also realizing their total elimination. This step is the only guarantee against the use or threat of use of nuclear weapons. Let’s seize any opportunity to materialize this lofty goal.