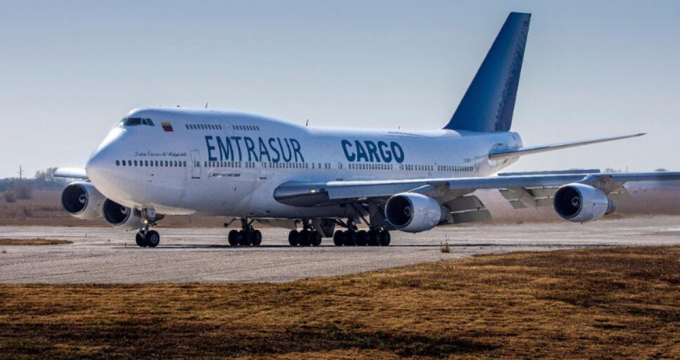 Explained: Detention of 747 and Iranian crew in Argentina

In early August, the US Justice Department said it was seeking to seize a plane that was flying around South America. It was a Venezuelan 747 cargo jet, but it was previously owned by an Iranian airline. It had been grounded in Argentina since early June. The plane was stuck in Argentina, but some of its crew had left the country.

Iranian media has now published an account about the cargo plane. The son of the pilot has said that the occupying regime of Israel, the US and Argentine Jews are behind a plot to keep the plane and its crew grounded.

The plane had been transferred from Iranian airline Mahan Air to Emtrasur, a subsidiary of Venezuela’s state-owned Consorcio Venezolano de Industrias Aeronáuticas y Servicios Aéreos or CONVIASA which is under US sanctions.

The cargo jet had arrived in Argentina on June 6 after a flight from Mexico. It had also tried to land in Uruguay. It had a crew of 14 Venezuelans and five Iranians. Two weeks after the reports emerged, Venezuelans protested against the grounding of the plane.

The plane was detained “with the coordination of the United States, the Zionist regime and England”, Hossein, the son of the plane’s pilot Captain Gholamreza Ghasemi told Fars news agency.

“This incident was definitely planned because when the plane wants to fly, it must also have landing permits at the destination airport, transit permits from the route countries, and alternative airports. Having the mentioned licenses means that airport, navigation, communication, refueling, firefighting and radio services must be given to this plane under any circumstances,” Hossein Ghasemi said.

The plane had permits to fly to Uruguay and had registered a flight path.

“When the pilot flew to Uruguay, there was no problem until Uruguay did not allow the plane to land! The pilot was forced to land due to lack of fuel in Argentina, which is the backyard of the Zionists,” he said.

His father, Hossein said, had flown with many airlines in the past and had flown to Dubai, Damascus, Paris and other cities.

“It was a year ago that the Boeing 747-300 cargo plane was sold to this country [Venezuela] due to the cooperation between Iran and Venezuela. For this reason, my father went to [Venezuela] to train the pilots on behalf of the Iranian Civil Aviation Organization to the Venezuelan crew.”

Iran has expertise in flying 747s because it has a number of them that date from the pre-Revolution era. These older planes are still flying and Iranian pilots have some unique expertise in keeping them aloft and extending their abilities.

“Due to his background and experience, my father was one of the two people who could teach other people the different steps and how to work with the mentioned airplane as a master pilot,” Hossein Ghasemi said.

Hossein says that his father spent a year training the Venezuelans and he made various flights in South America.

“He flew more than 100 times on different routes in Latin America. As a result, the presence of him and other Iranian crew in Latin America was not a new and strange event, and it is quite natural that when a country buys an airplane, it uses the master pilot of that country to transfer the technical knowledge of that airplane, it is a very common thing in the world.”

Then something went wrong. As opposition parties and others became aware of the plane, someone made a request to Uruguay. According to reports in June, Uruguay’s Interior Minister Luis Alberto Heber had said his country had received a “formal warning from Paraguayan intelligence.”

According to Fars, the occupying regime of Israel was responsible for the plane being diverted.

“During this work, all kinds of international and aviation laws were violated to make this happen,” Hossein Ghasemi said.

In the interview with Al Mayadeen Espanol, Captain Ghasemi reiterated that he is a flight instructor and had no ties to the Iranian military except for fighting in the Iran-Iraq War (1980-1988) as a volunteer in the Basij Popular Mobilization Forces.

The seizure of the plane took place as Venezuela’s President Nicolas Maduro was on a trip to Iran on June 10. He was in the Islamic Republic to announce a 20-year deal with Iran.

The cargo plane was indeed grounded in that 48-hour period after it had landed before it could depart, as the Venezuelan leader was preparing for his own trip.

“The Zionist regime and the United States were trying to create a story to disrupt the relations between Iran and Venezuela. For this reason, this caused the crew of the said flight to be taken hostage,” Fars said.