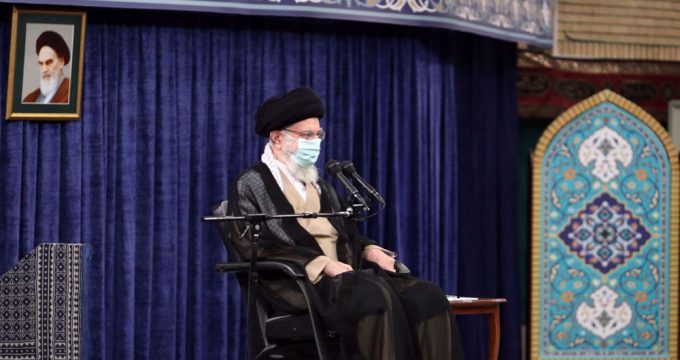 Leader of the Islamic Revolution Ayatollah Seyyed Ali Khamenei has hailed the Islamic Republic as the most promising force in the face of plots pursued by colonial powers, stating that most of their outrageous demands have been resisted and rejected due to Iran’s struggle.

Ayatollah Khamenei made the remarks on Saturday as he addressed participants of the 7th Summit of General Assembly of Ahl al-Bayt World Assembly in Tehran.

“Followers of the Household of Prophet are proud to have taken the most significant step in confronting the system of arrogance and dominion. Many words are being uttered; but what is actually taking place on the ground is a clear and definite thing. It is the Islamic Republic acting as the flag-bearer in this regard,” he noted.

He added that Shia Muslims take great pride in standing up against arrogant powers, which interfere in the affairs of other countries, governments, and nations in a cruel and tyrannical manner.

The Leader went on to say that Islamic Republic of Iran is hoisting the flag of justice and spirituality.

It is natural for arrogant powers to oppose the country which is branding such a flag. Therefore, the arrogant countries’ opposition and confrontation with the Islamic Republic is a natural issue, Ayatollah Khamenei pointed out.

Ayatollah Khamenei described Iran’s encouragement of other nations to stand up against bullying as the main reason behind arrogant powers’ wrath and enmity towards the Islamic Republic.

The Leader also highlighted that Tehran’s neutralization of Washington’s criminal plots in other countries, one of which was the creation of Daesh Takfiri terrorist group, triggered intense campaign of  Iranophobia and Shiaphobia, as well as wild accusations  that Iran is meddling in the domestic affairs of other countries.

Ayatollah Khamenei said the United States spearheads global arrogance, emphasizing that accusations are being made against Iran as arrogant powers are unable to prevent the significant progress of the Islamic Republic.

“Everyone should stand up against the policies of arrogant powers, exercise vigilance and not associate with them,” the Leader of the Islamic Revolution said.

Ayatollah Khamenei also said the policy of the arrogant powers is to paint unrealistic dividing lines in the Muslim world.

The Leader added that recent incitement and planning for a war between Shia and Sunni Muslims, Arabs and non-Arabs or even intra-Shia and intra-Sunni conflicts are the all orchestrated by the United States.

The 7th Summit of the General Assembly of Ahl al-Bayt World Assembly is underway in the Iranian capital city of Tehran and the northeastern shrine city of Mashhad, and will run through September 4. It has attracted hundreds of guests from more than 110 countries.

The Ahl al-Bayt World Assembly is an international non-governmental organization in Iran.

It was founded in 1990 by a group of Shia elites in order to identify, organize, educate and support followers of the Household of Prophet Mohammad.