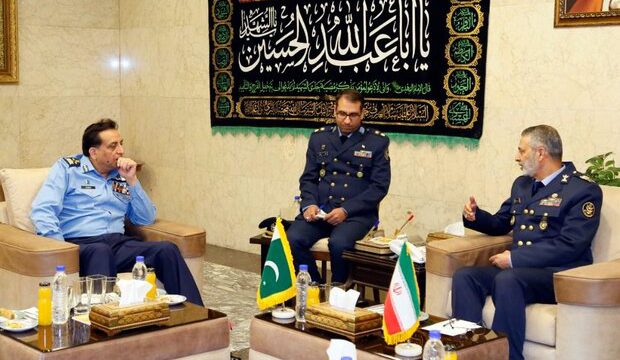 Pakistan keen on coop. with Iran on aerospace, drone field

Stating that Iran has made great progress in aerospace, especially in the field of drones, the Chief of Air Staff of the Pakistan Air Force said that his country is interested in cooperation with Iran in these fields.

Zaheer Ahmad Babar Sidhu, Chief of Air Staff of the Pakistan Air Force made the remarks in a meeting with the Chief Commander of the Iranian Army Major General Abdolrahim Mousavi.

“In the current situation where we are witnessing complex and emerging battles, we need the armed forces of the two countries, especially the Air Force of Iran and Pakistan, to be closer to each other,” he said, announcing the readiness of Pakistan in increasing military cooperation with Iran.

“In recent years, the Islamic Republic of Iran has made great progress in the field of aerospace, indigenizing airplanes, and especially in the field of drones, and we would like to cooperate with the Iranian Armed Forces in these fields,” the Pakistani commander added.

General Mousavi, for his part, pointed to the holding of joint naval exercises between Iran and Pakistan, saying that the two countries can also hold a joint air exercise.

He stressed that the air force has always had a decisive role in war and deterrence, adding that in recent years, the impact of the air force and aerospace in the battle scene has increased, especially in the field of drones.