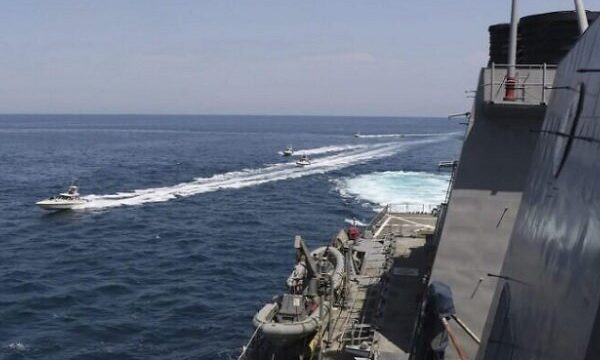 An Iranian military source reacted to the CENTCOM commander’s remarks on IRGC action, saying that the illegal presence of the US military forces in the Persian Gulf has always caused insecurity.

The illegal presence of the US military forces in the Persian Gulf has always caused insecurity, and this process has recently created new problems for safe shipping in the region by using unmanned vessels, the military source said.

Iran’s Islamic Revolutionary Guard Corps (IRGC) has seized an American sea drone in the Persian Gulf and tried to tow it away, only releasing the unmanned vessel when a US Navy warship and helicopter approached, US officials have said.

The Commander of the terrorist Central Command General Michael E. Kurilla called the IRGC’s action in controlling the American unmanned vessel in the Persian Gulf illegal and destabilizing.

“The professionalism and competence of the crew of the USS Thunderbolt prevented Iran from this illegal action. This incident once again demonstrates Iran’s continued destabilizing, illegal, and unprofessional activity in the Middle East,” he claimed in a statement.

Referring to the timely action of the IRGC Navy, the Iranian military source added that recently, a large number of unmanned military vessels have been sent by the US Navy to the Persian Gulf and the Sea of Oman, which, in addition to threatening the security of shipping lines, has also led to some maritime accidents.

Emphasizing the determination of the naval forces of the Islamic Republic of Iran to continue to carry out their legal and necessary missions in the Persian Gulf and the Sea of Oman, the source said, “As in the past, we will not be indifferent to the measures that cause insecurity in the region, and we will continue our legal duties in the framework of the inherent missions of protecting and securing shipping lines to prevent any insecurity and instability.”