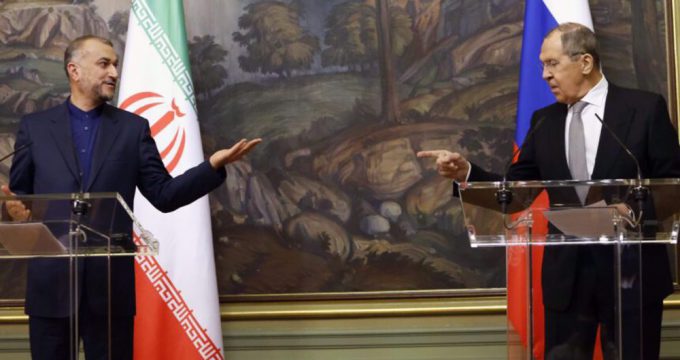 Speaking at a joint press conference with his Russian counterpart Sergei Lavrov, Amirabdollahian said the foreign minister said that Iran has received a text from the American side which is being examined in the Iranian Foreign Ministry with due care and speed.

He, however, said that Iran requires stronger guarantees in this regard.

Pointing out that Iran is serious for reaching a sustainable agreement, he said that if the American side acts realistically and if the negotiating parties further strengthen the existing text, an agreement is not out of reach.

The Iranian foreign minister also pointed out that he is carrying an important message from a European leader to the Russian officials.

The Russian foreign minister, for his part, said that talks are underway for reaching an agreement on establishment of a free trade zone between Iran and the Eurasian Economic Union (EAEU).

Noting that Russia is working on a long-term document with Iran on economic cooperation, Lavrov said that the two countries may set out an economic roadmap plan.

He also touched upon the talks between Iran and the P4+1 in Vienna on the removal of sanctions on Tehran and said that Russia supports the lifting of all the sanctions imposed on Tehran and the revival of a 2015 nuclear deal with Iran – known as JCPOA.

He stressed that Russia shares views with Iran in various range of issues.

In the meantime, the Iranian foreign minister said that Iran and Russia enjoy abundant capacities for expansion of ties and that a cooperation document of the two countries will be put into force in the near future after being examined in the parliaments of both countries.

Amirabdollahian said that he and his Russian counterpart discussed the Afghan issue, underlining the need for the formation of an inclusive government which represents all the Afghan groups.

He said that they also had talks on the Syrian issue where they stressed their resolve to help find a settlement to the crisis in the country via Astana peace process.

Amirabdollahian said that on the situation going on in Yemen, the two foreign ministers are in favor of a sustainable ceasefire in the country and lifting the siege on the Yemeni people.