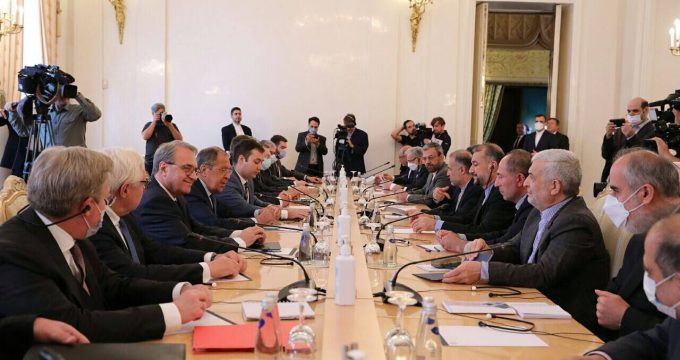 Amirabdollahian: Rasht-Astara railway to be operational in joint agreement

Iranian Foreign Minister Hossein Amirabdollahian said on Wednesday that the development of cooperation in the North-South transit corridor is one of the significant priorities of the Islamic Republic of Iran, and the Rasht-Astara railway will be operational in the joint agreement.

Pointing to the development of cooperation in the North-South transit as Iran’s significant priority, Amirabdollahian underlined that the Rasht-Astara railway will be operational in the joint agreement.

Referring to the right track of relations between Iran and Russia, Amirabdollahian stressed the need to continue and strengthen joint efforts to further develop ties in various bilateral dimensions.

In this regard, Amirabdollahian termed the necessity of joint efforts to realize and implement the agreements of the presidents of Iran and Russia in Ashgabat and Tehran as important.

Expressing satisfaction over the increasing trend of trade cooperation between the two states, the top Iranian diplomat added that facilitating cooperation, and eliminating obstacles plus problems are the basis for strengthening the volume of trade between Iran and Russia.

Emphasizing boosting the railway cooperation between Iran and Russia, he called for expediting the implementation of rail and transportation projects.

Lavrov, for his part, stressed the importance of the agreements of the Presidents of the two countries in Ashgabat and emphasized the need for joint efforts to implement them.

Expressing satisfaction over the enhancing level of cooperation between Iran and Russia, he reiterated that as a result of the increased exchange of economic and trade delegations between the two countries and the consequent agreements, “we hope to see more growth in cooperation” in all areas of interest.