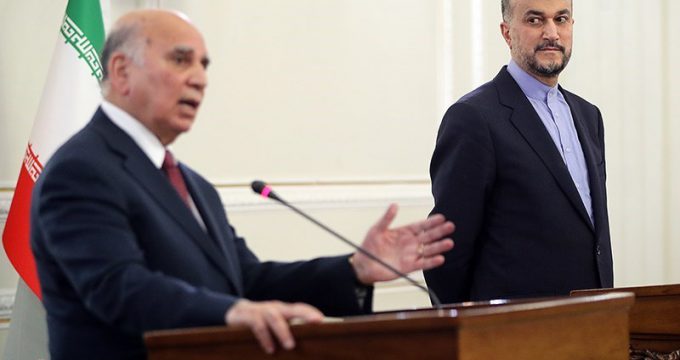 Iran FM: Iraq’s problem must be solved through legal channels and respect for govt.’s sovereignty

Iran’s foreign minister has emphasized the need for preserving the national unity of Iraq, saying the country’s problems must be solved through legal channels.

Hossein AmirAbdollahian made the remark in a Monday meeting with his Iraqi counterpart, Fuad Hussein, in Tehran.

During the meeting, the Iranian top diplomat highlighted the need for preserving Iraq’s stability, peace and national unity, while calling on all political groups to show respect for legal institutions of the Arab country.

AmirAbdollahian added that all the current problems in Iraq must be solved through legal channels while showing respect for the sovereignty of the government.

He also called for further expansion of trade and economic cooperation between the two countries by taking advantage of their existing potentialities.

The Iraqi foreign minister, for his part said the security of Iran and Iraq are intertwined, emphasizing that his country will not allow its territory to be used for posing any threat to the Islamic Republic.

Last Monday, Iran’s President Ebrahim Raisi advised all political groups in Iraq to settle their differences through dialogue and interaction.

Raisi made the remarks in a phone call with Iraq’s Prime Minister Mustafa al-Kadhimi, during which he stressed the necessity of safeguarding the unity of the Iraqi nation.

“All major political groups in Iraq should agree on a way out of the existing political problems through dialogue and interaction,” Iran’s president said.

Iraq has been in a political deadlock since last October’s general elections. Rival parties have failed to agree on the formation of a new government, leading to protests and occupation of parliament.

The political bloc led by prominent cleric Muqtada al-Sadr emerged as the biggest parliamentary faction in the election, but fell short of an absolute majority needed to form a government, causing the existing political stalemate in the country.

In June, all 73 legislators of the bloc quit their seats in a move seen as an attempt to pressure political rivals into expediting the formation of a government.

Sadr and his supporters have helped inflame tensions over the last two weeks with thousands of his followers storming and occupying the country’s parliament and preventing the formation of a government nearly 10 months after the last elections.

Earlier on Monday, Sadr announced that he is quitting political life and closing his political offices.

In his statement, Sadr also attacked his political opponents, saying that they had failed to heed his calls for reform.

Following the announcement, Sadr’s supporters stormed the Republican Palace, which is a ceremonial building inside Baghdad’s fortified Green Zone of government buildings, clashing with security forces who finally gained control of the palace.

Later on Monday, Iraq’s Joint Operations Command set a full curfew in the capital of Baghdad until further notice, which began at 19:00 local time (1600 GMT), state news agency INA reported. It also urged the protesters to leave the Green Zone to avoid clashes.

According to Iraqi medics and police sources, 12 people have been so far killed and as many as 270 others injured in clashes in the capital Baghdad.