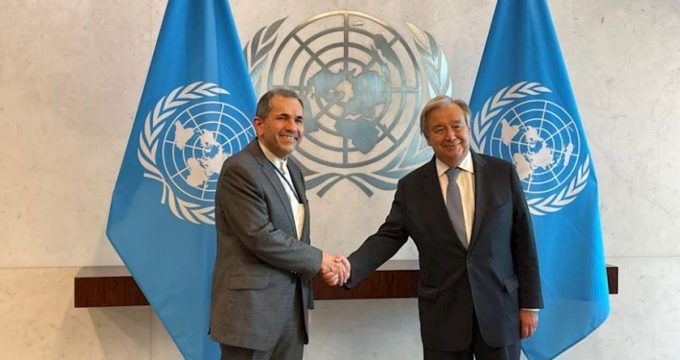 Majid Takht Ravanchi, former Ambassador and Permanent Representative of the Islamic Republic of Iran to the United Nations, met with UN Secretary-General Antonio Guterres to say farewell at the termination of his 4-year mission.

Last Sunday, Saeed Iravani was appointed as the new ambassador and representative of the Islamic Republic of Iran in the United Nations.

Iravani replaced Majid Takht Ravanchi, who was in charge of this position for four years.

“At the end of my tenure as Iran’s UN Ambassador, I had a constructive and friendly meeting with the UNSG Guterres, covering NPT Review Conference, JCPOA, and regional issues, including the Persian Gulf area as well as the UN role at the world stage,” Iranian envoy to the UN Majid Takht Ravanchi tweeted.

Saeed Iravani was appointed as Iran’s new Ambassador and Permanent Representative to the United Nations.

Iravani has been in charge of the Office for the Protection of charge d’affaires of Iran in Iraq, as well as the deputy of international security and foreign policy of the Secretariat of the Supreme National Security Council.