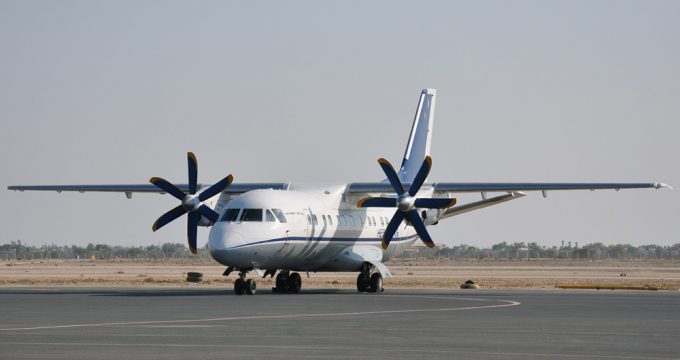 The head of the Civil Aviation Organization says the West is waging a full-scale war against Iran’s aviation sector as he unveils plans to produce a 50-seat Iranian plane.

“The idea and plan to build a passenger plane has been around for years. It is an order and strategy that the Islamic Republic is following,” Mohammad Mohammadi-Bakhsh told a news conference Wednesday on the eve of the Government Week.

The official said using the scientific capacities of the country for the purpose requires a great convergence and industrial work, noting that in the world a few countries can produce airplanes in the form of consortiums.

Given the special restrictions which the Islamic Republic is faced with in the form of sanctions and other hostile measures, Iran has to pool all its capacities for the plan.

According to Mohammadi-Bakhsh, three platforms of 50-, 72- and 150-seat passenger planes have been prepared, wherein the country’s needs have been taken into account.

The production will start with a 50-seat model at the Iran Aircraft Manufacturing Industries Corporation based in the central city of Shahin Shahr.

“Of course, necessary reviews will be made in various areas and the problems and defects will be resolved in coordination with the ministries of road, defense and industry,” he said.

“In the not too distant future, we will announce good news about the production of Iranian aircraft. At the same time, we will pursue imports of foreign-made planes,” the official added.

The civil aviation program includes a 10-year roadmap charting out the direction which it has to take according to the needs of the regional and extra-regional markets.

Iran’s aviation industry depended on foreign consultants, mainly Americans, before the 1979 Islamic Republic to keep the fleet airworthy, but amid the sanctions the job today is done by Iranian specialists.

“Sanctions in the aviation sector is a light word. We are in a full-scale war with the West. In this regard, we use all our capacities to make the sanctions ineffective and less effective, which we have been successful so far,” Mohammadi-Bakhsh said.

“We do not send any engine or aircraft abroad for repair and maintenance. At present, we repair the aircraft of the countries” that have a technological edge in the area, he added.

Iran had placed orders for purchases of 200 brand new planes from Airbus and Boeing after it reached nuclear deal in 2015. The contracts, however, came to a halt in 2018 after the US Treasury banned the two planemakers from supplying the jets to Iran.

During a brief trade thaw between Iran and the West, Iran signed $36 billion worth of contracts in 2016 to buy airliners from Boeing, Airbus and Franco-Italian turboprop maker ATR.

National flag carrier IranAir ordered 100 passenger aircraft from Airbus, 80 from Boeing and 20 from ATR, but the deals depended on US license because of the heavy use of American parts in the planes.

Iran had imported three aircraft from Airbus and 13 from ATR when the US Treasury Department under former president Donald Trump revoked export licenses.

Mohammadi-Bashkh has said some of the aircraft delivered under the nuclear agreement require heavy maintenance checks, but the Europeans are not fulfilling their obligations to supply repair components.

Meanwhile, a searing question on the minds of many Iranians has been whether the duopolists and ATR will ever consummate the deals.

Last December, Mohammadi-Bashkh said a likely revival of the nuclear deal would resurrect the country’s contracts to buy passenger jets from the likes of Airbus and Boeing.

“The program to modernize the aviation industry is the desire of the president [Ebrahim Raisi], and with the possibility of reviving the JCPOA and removing restrictions, the aircraft purchase contracts will also be revived,” he said, using the acronym for the Joint Comprehensive Plan of Action.

In February, former CAO chief executive Touraj Dehqani Zanganeh said his organization had written to Boeing to inquire about the fate of its $16.5 billion deal with the US aircraft maker.

Major planemakers are subject to US export restrictions for trade with Iran because more than 10 percent of the parts on their jets originate with US companies.