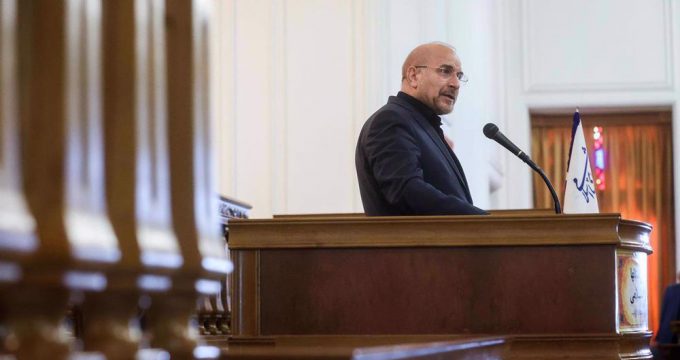 Iranian Parliament Speaker Mohammad Baqer Qalibaf has urged the Western countries to stick to their commitments under the 2015 nuclear agreement, warning them of any attempt to re-violate the deal through “bullying policies”.

“Iran will not let any excessive demands regarding the JCPOA revival and advise the Western side to refrain from violating the deal through bullying,” Qalibaf wrote in a Twitter post in Persian early on Friday.

Tehran has provided the EU with its final conclusion on the talks aimed at reviving the JCPOA on Monday, emphasizing that it is now the US’s turn to show realism and flexibility if it really wants a final agreement to be reached.

“We have proven that if they comply with the agreement, we will also do,” added the speaker.

“We hope that the Western side would yield to the legitimate demands of the Iranian people in the negotiations,” he noted.

After four days of negotiations, Iran and the five remaining parties to the JCPOA concluded talks on August 8 with a modified text on the table.

On Monday, Iranian Foreign Minister Hossein AmirAbdollahian said that if the US shows a realistic and flexible reaction to Iran’s offer, “we would be at the point of agreement,” adding, “The American side has orally agreed to two proposals offered by Iran.”

In his latest comments made during a phone conversation with his Omani counterpart Sayyid Badr al-Busaidi on Thursday afternoon, the Iranian minister noted that all remaining issues should be solved to reach a lasting agreement.

“We cannot talk with certainty about reaching a good and lasting agreement unless everything is agreed upon,” he said.

A report by the New York Times on Tuesday quoted officials as describing Iran’s response as “encouraging,” saying it does not raise major new objections.

Meanwhile, State Department spokesperson Ned Price confirmed on Wednesday that the US had received Iran’s comments via the EU. He said the US administration is studying the notes as it remains “engaged in consultations with the EU as well as with our European allies on the way ahead.”

Former US president Donald Trump unilaterally withdrew the United States from the JCPOA in 2018 and reinstated the sanctions that the deal had lifted and imposed new ones.