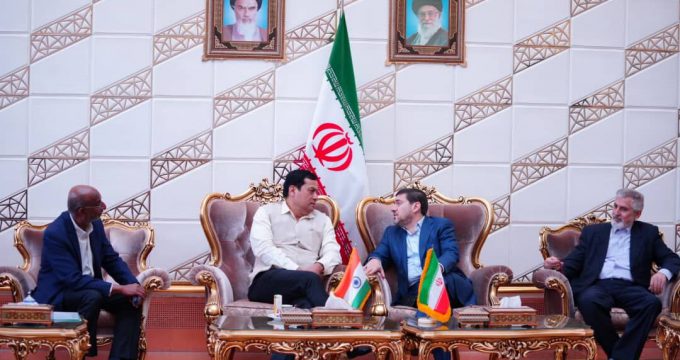 Sarbananda Sonowal, India’s Minister of Ports, Shipping, and Waterways, has arrived in Tehran to discuss the expansion of cooperation with the Islamic Republic of Iran’s authorities.

According to the Ports and Maritime Organization of Iran, the Indian minister heading a high-ranking delegation traveled to Tehran, where he was welcomed by Deputy Minister of Roads and Urban Development Ali Akbar Safaei on Friday.

Some prominent directors such as Sunil Mukundan, the Managing Director of India Ports Global Ltd, accompany the Indian minister in the trip to Iran.

The Indian delegation is scheduled to visit port terminals and equipment in Chabahar Port city, hold talks with Iranian Minister of Roads and Urban Development Rostam Ghasemi, sign a document to make operational agreements on transportation, ports and maritime, as well as meet with some Iranian officials as part of their program in the trip.

Safaei expressed hope that the collaborations of the two countries would increase in all fields, including maritime and port interactions.

The deputy minister referred to the opportunity for India to participate in different projects in Iran, including development of Chabahar Port, underlining that the development of the port city can help boost trilateral cooperation among India, Afghanistan and Iran.

The Islamic Republic of Iran Shipping Lines (IRISL) initiated multi-sided transit of goods from Russia to India via the International North-South Transport Corridor (INSTC) for the first time.

The three states inked a landmark transit trade agreement on Chabahar Port in May 2016.