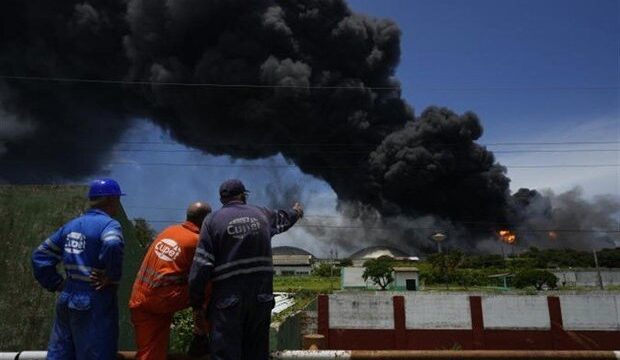 In line with the goals of activating energy diplomacy by the Iranian Ministry of Petroleum, after a massive fire occurred in oil facilities in Cuba by lightning, a group of Iranian experts was sent to help the country.

After lightning struck a large crude oil storage facility in the city of Matanzas, Cuba, and four consecutive explosions that injured more than 50 people, the Iranian Oil Minister Javad Owji, ordered a technical and specialized team from Iran to be dispatched to the Latin American country upon its request.

In the first step, Mazaher Ansari, Director General of Health, Safety and Environment (HSE) of the Iranian Ministry of Petroleum, in the presence of Alexis Bandrich Vega, the Cuban Ambassador in Tehran, during a video conference call with the fire-fighting group, Cuban oil officials and the Deputy Minister of Oil of Cuba, gave key guidelines about the dos and don’ts of tank fire suppression to the operation group, and as a result of the transfer of experience, the repetition of mistakes in the fire extinguishing process was prevented.

In the next step, by order of the Oil Minister, a group of experts and experienced people were sent to Cuba under the chairmanship of the Director General of HSE of the Ministry of Oil. The first goal of the group is to transfer experiences and pieces of training on firefighting and dealing with tank fires and training Cuban experts to deal with tank fires and control them. These pieces of training will help Cubans to be prepared to deal with such cases in the future.

As the second goal, visiting the Cuban oil facilities and auditing and assessing the risk of the facilities is on the agenda of this group so that the safety status of these facilities can be evaluated and the required reforms transferred to the Cuban experts.

The delegation is also scheduled to meet with the Cuban oil authorities, and the necessary equipment for fire suppression, including foam generators, firefighting and anti-acid suits, breathing apparatus, and other items were sent to this country as much as possible.

With the activation of energy diplomacy in the Ministry of Petroleum , providing technical and engineering services and consultations to friendly and cooperating countries is followed as one of the policies of the Ministry.

The Iranian group also plans to provide technical advice in order to secure the scene for the start of post-accident activities and to rebuild the facilities, and for this purpose, it is necessary to carry out necessary assessments of Cuban oil facilities for recovery and rehabilitation activities, especially for firefighters involved in extinguishing operations.

Evaluation of the operations and strength of the firefighters and the firefighting team in Cuba is followed as another mission of the Iranian group to identify their weaknesses and strengths and to obtain the necessary preparation for similar operations. The experience in Tehran Refinery and Bou Ali Petrochemical Plant will be transferred to the Cuban group.

The Iranian experts present in Cuba are now busy inspecting the safety of the facilities and presenting a report on the deficiencies and solutions to improve safety and fire protection (active and passive) in the facilities.

The Iranian group has prepared a proposal package to present to the oil authorities in order to transfer Cuban experts to the country and train them in special training centers for safety and firefighting and specialized field commander training courses.

On the other hand, there are going to be negotiations with the Cuban authorities so that the provision of safety engineering services with the aim of securing and improving the level of fire protection of the facilities will continue periodically by Iranian experts.