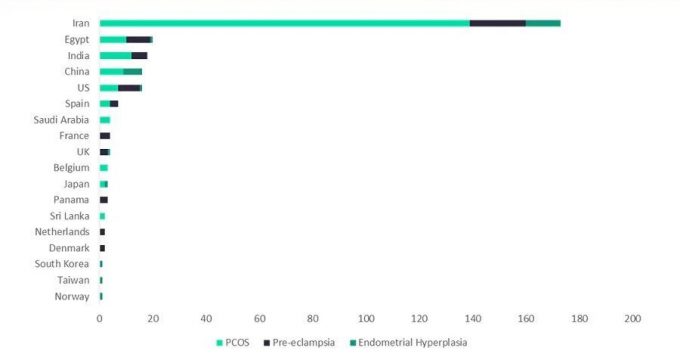 Iran is a leader in Phase III clinical trials in women’s health: analysis

An analysis of GlobalData’s Clinical Trials Database shows that over the course of the last ten years or so, Iran has consistently been a leader in terms of the number of Phase III clinical trials carried out in women’s health.

According to the analysis which was published on Friday, Iran’s dominance in women’s health is spread comprehensively across indications, with more clinical trials than any other country.

Iran’s dominance in this therapy area is spread fairly comprehensively across many indications, with more trials than any other country in most indications.

However, the overall data is possibly skewed by an overwhelming lead in Phase III trials for polycystic ovarian syndrome (PCOS), with Iran carrying out more than double the number of trials as all other countries combined.

PCOS is difficult to diagnose, generally under-researched, and can lead to infertility or other serious health conditions such as coronary heart disease.

Many Iranian trial sites have focused on the effect of various supplements on those with PCOS. In other indications such as pre-eclampsia and endometriosis, while not as large a majority, it is still undoubtedly Iran that leads the area of research.

At present, the lack of female doctors has caused issues with the development of the program, but nevertheless, there are several female-only hospitals operational in Iran, mostly attached to universities and medical schools.

One of these hospitals, the Arash Women’s Hospital in Tehran, has been the site for 38 Phase III trials in women’s health over the past ten years, more than any other trial site in the world.

Women’s life expectancy has increased from 51 years in 1978 (before the 1979 Islamic Revolution) to 75 years, Ensieh Khazali, Vice President for Women’s and Family Affairs, has announced.

Investing in women’s health will improve the country in all areas, for example, rural women’s health can prevent rural to urban migration, she added.

The national women’s health week is usually held in the last week of the Iranian calendar month of Mehr (ending October 22).