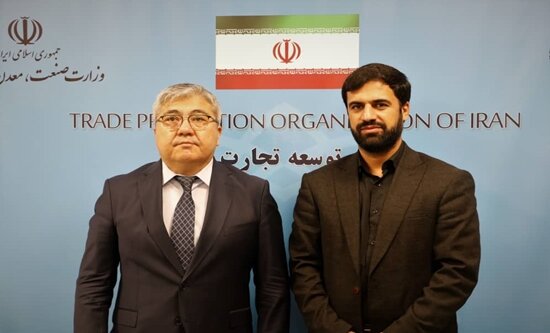 In this meeting, the officials stressed the need for exchanging trade delegations and holding special exhibitions in the two countries as positive steps toward boosting the volume of mutual trade, the TPO portal reported.

Speaking at the meeting, Sydykov expressed appreciation for the favorable cooperation made by Iran’s Trade Promotion Organization with the Kyrgyz Embassy and businessmen of this country in Iran and said: “The Kyrgyz Embassy in Iran has a comprehensive plan for the development and promotion of joint investment and economic cooperation between the two countries.”

The official mentioned the development of tourism cooperation and the establishment of direct flights between the two countries, especially the city of Bishkek to Mashhad or Tehran, as other important steps that should be taken for the promotion of economic cooperation between the two sides.

“I hope that holding international exhibitions and the establishment of the joint economic committee between the two countries will provide the basis for increasing business interactions and boosting economic relations,” he added.

Welcoming the suggestions made by the Kyrgyz ambassador in Iran, Peyman-Pak for his part said: “Regarding the exchange of business delegations and the holding of Iran’s exhibition in Kyrgyzstan, we are negotiating with the general managers of the Industry Ministry to hold international exhibitions and to send specialized business delegations to Kyrgyzstan to carry out the necessary coordination.”

Specific areas of cooperation should be defined so that the businessmen of the two countries could focus on their strong points to get better results, Peyman-Pak said.