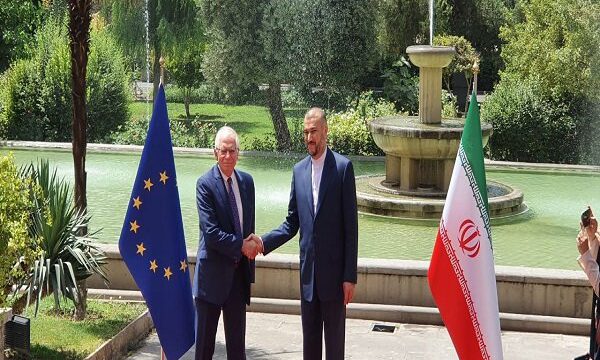 All sides must be serious about achieving text of final agt.

Iran’s Foreign Minister Hossein AmirAbdollahian says all parties involved in the Vienna talks on the revival of the JCPOA must take serious steps toward reaching the final text of an agreement.

AmirAbdollahian made the remarks in a Monday phone call with the European Union foreign policy chief, Josep Borrell, in which the two sides discussed the latest developments surrounding the talks.

Iran’s top diplomat told Borrell that the Iranian delegation has been serious and determined to achieve an agreement in Vienna and has offered its constructive ideas for the resolution of outstanding issues.

“Iran’s views and considerations on the ideas offered by [Borrell’s deputy] Enrique Mora have been conveyed to him and all parties [to the deal] are expected to show seriousness and resolve in order to achieve the final text of the agreement,” AmirAbdollahian said.

Iran’s foreign minister said any final agreement must meet the rights and interests of the Iranian nation and guarantee sustainable and effective removal of sanctions imposed on the country.

He expressed hope that the path to a final agreement would be paved through realism and by avoiding the adoption of nonconstructive positions, especially by the United States.

Borrell, for his part, said he believes that relative progress has been made during the latest round of the Vienna talks, which he described as positive.

As the EU coordinator, he vowed to continue efforts to bring the viewpoints of all parties to the deal closer to reaching a good result.

Earlier in the day, a senior official in Iran’s Foreign Ministry said during fresh talks on the JCPOA revival in Vienna, Tehran informed the opposite parties of its positions and “relative advances were made on a number of issues.”

Pointing to Mora’s several ideas on a number of outstanding issues, the unnamed official added, “As soon as we received these ideas, we informed him of our answers and primary considerations. Naturally, such issues need more comprehensive discussions and we will convey our additional views and considerations to the [JCPOA] coordinator and other parties.”

Meanwhile, EU Foreign Policy Chief in a tweet on Monday wrote that political decisions should be made in the capitals, as talks to revive the 2015 Iran nuclear deal wrapped up in Vienna.

“Negotiators used these days of discussions and proximity talks between the US and Iran to fine tune and address – with technical adjustments – a handful of issues remaining in the text that I have put on the table last July 21, as coordinator of the #JCPOA nuclear deal.”

“What can be negotiated has been negotiated, and it’s now in a final text. However, behind every technical issue and every paragraph lies a political decision that needs to be taken in the capitals. If these answers are positive, then we can sign this deal.”

After several months of impasse, the Vienna talks resumed on Thursday. Expert-level negotiations have been held between Iran and the P4+1 group of countries.