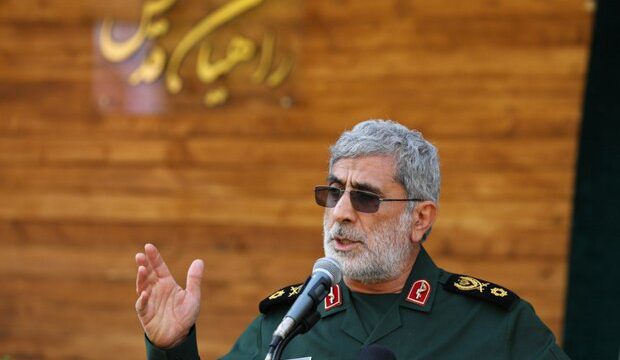 Pointing out that the Israeli regime has collapsed, the commander of the Islamic Revolution Guards Corps Quds said that 15 operations are carried out against the positions of the regime every day.

Brigadier General Esmail Ghaani made the remarks late on Friday in a ceremony which was held to commemorate holy shrine defender martyrs.

Referring to the security measures carried out by the Israeli regime for fear of operations by Resistance groups, Ghaani said 15 daily operations are carried out against the positions of the occupying regime.

According to the IRGC Quds Force commander, the IRGC forces are monitoring the hostile measures of the US and the Israeli regime.

Stating that the Israeli regime has collapsed, he added that IRGC forces will stand by the Hezbollah forces to destroy this regime.

Brigadier General Esmail Ghaani, Hezbollah, IRGC Quds Force commander August 6, 2022 no comments
Iran’s export of products to Turkiye up 81% in H1
FM: Iran not to abandon demanding even a drop of its water share