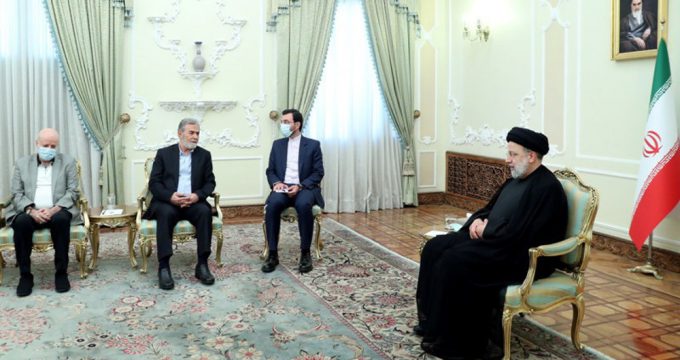 Iranian President Ebrahim Raisi says the bright path of resistance has left the enemy stranded and brought hope to supporters of Palestine.

In a meeting with Secretary General of the Gaza-based Islamic Jihad movement Ziad al-Nakhala in Tehran on Thursday, Raisi noted that Muslim nations in the region “are today filled with deep hatred of the usurping Zionist regime and have found the resistance as the key strategy to counter the regime.”

The Iranian president stressed that resistance is both a defensible idea and a results-yielding method in the field of action.

“It has surely been the bright path of resistance, not the so-called peace deals, that have left the enemy stranded and helpless, and brought hope to supporters of resistance across the world,” Raisi emphasized.

He also described Israel’s attempts to normalize ties with some countries in the region as futile attempts that failed to bring security to the occupying regime.

“The Zionist regime thought that through normalizing and establishing ties with these countries it could manage to provide security for itself but such attempts have by no means ensured security for Zionists so far and they will not in the future since they don’t have sound knowledge of and correct prediction about the region and its future developments,” Raisi added.

The Iranian president also considered the support of Palestine and its resistance to be the definitive policy of the Islamic Republic of Iran, saying, “We have no doubt in the triumph of the Palestinian resistance and the liberation of the Holy Quds, which is the dream of martyr [Lieutenant General Qassem] Soleimani and all the martyrs of the resistance.”

Nakhala, for his part, said that he was glad to meet with the Iranian president. “Today, more than ever, Iran has a strong and powerful presence in the region and the world,” he said.

The chief of Islamic Jihad emphasized that the approach adopted by the Iranian president was crucial in boosting ties with the regional countries and standing against hegemonic powers.

Nakhala further said that the “axis of resistance” excels more powerfully than ever with remarkable achievements.

“Undoubtedly, the continuation of this path will lead to the weakening and destruction of the Zionist regime thanks to the support of the Islamic Republic of Iran, particularly [Leader of Iran’s Islamic Revolution ] Ayatollah Khamenei,” he said.

“Victory is near, and God willing, we will all enter al-Quds together,” Nakhala added.