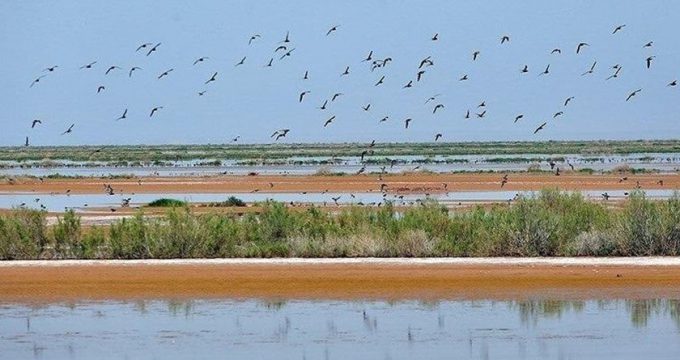 Which wetlands refilled in flooding?

The recent floods caused by monsoon rains, while affecting two-thirds of the Iranian plateau and leaving many people dead and injured, have refilled dried rivers, streams, and dams.

August rains are very important and can revive the qanats and make agriculture flourish in the summer heat, and even one of the reasons for living in the plateau of Iran in the past centuries was monsoon rains.

Recent rainfalls brought about 250 to 260 million cubic meters of water into the country’s dams.

The recent rainfall system has increased the long-term average rainfall in August from about 4 mm to 11 mm, which is a significant amount happening rarely; the monsoon system extends to the Alborz and Zagros mountains in addition to the south and southeast of the country.

Firooz Qasemzadeh, the spokesperson of the country’s water industry, said that these rains brought about 250 to 260 million cubic meters of water into the country’s dams, which is not a significant number, while its effect on the aquifers will be determined in a period of 12 months.

In provinces involved in the monsoon rain system, especially the southern ones, the water entered the river beds and moistened the dry soil of wetlands, and watered several wetlands, aquifers, and dams, he noted.

Stretching 47,000 hectares, Gavkhuni is a salt marsh with an average depth of about 1 m. which is located in the terminal basin of the Zayandehrud river.

It is the 19th wetland in Iran designated as a Wetland of International Importance on the Ramsar list, which as defined by the Ramsar Convention for the conservation and sustainable use of wetlands, recognizes the fundamental ecological functions of wetlands and their economic, cultural, scientific, and recreational value.

Although it was hoped that the recent rains would revive this wetland, according to the Isfahan department of environment, the share of this wetland from the recent rains is small and less than one percent of the minimum annual water requirement of the wetland, so there are no floods and runoff. Water from the Zayandehrud river has not entered the lagoon.

Nestled between the provinces of Kerman and Sistan-Baluchestan, Jazmourian is one of the two major wetlands in southeast Iran, which is on the knife-edge of complete desiccation as a result of climate change, excessive dam construction, and the depletion of groundwater resources.

In January, heavy rainfalls have led the Jazmourian wetland to be filled by 100 percent. However, it dried up once again in June and turned into a dust storm hotspot.

According to the investigations of local groups in the province and the analysis of satellite maps, 20 percent of the Jazmourian wetland has been filled during the recent rains, which is expected to increase in the coming days with the arrival of flood water.

This wetland, which is located in the central desert of Iran and about 65 km from the city of Qom on the Qom-Garmsar highway, has an area of more than 33,000 hectares and has been declared a prohibited hunting area since 2018.

As a result of the recent floods, the dry wetlands of Qom once again filled with water.

Other wetlands and dams

The recent rains hit a record high in Bakhtegan city of Fars province, which caused the waterlogging of Zashk and Bakhtegan lakes.

In Tehran, water entered the seasonal wetland of Band Alikhan after a long time of dryness.

Bandalikhan seasonal meadows and wetlands with an area of 196,000 hectares are located between the three provinces of Tehran, Qom, and Semnan.

Shadegan wetland was also filled with water, which depicted one of the most bitter pictures of drought in Iran over recent years.

Shadegan wetland covers 530,000 hectares, 400,000 hectares of which have been designated as a Ramsar site (defined by the Ramsar Convention for the conservation and sustainable use of wetlands, recognizing the fundamental ecological functions of wetlands and their economic, cultural, scientific, and recreational value).

The wetland feeds on Marun and Karun rivers both crossing Kohgiluyeh-Boyer Ahmad province, but after dam construction over the Karun river, the wetland went dry not receiving its water right.