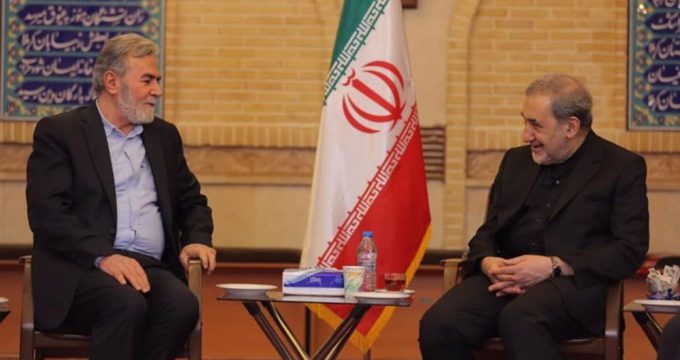 A senior Palestinian official praises the growing power of Iran and the broader regional resistance front against Israeli occupation, saying the regime has today found itself encircled from all directions by the resistance axis.

Secretary General of the Palestinian Islamic Jihad resistance movement, Ziyad al-Nakhalah, made the remarks in a meeting with Ali Akbar Velayati, a senior advisor to Leader of the Islamic Revolution Ayatollah Seyyed Ali Khamenei, in Tehran on Wednesday.

He added that Iran and the resistance front are gaining more power every day thanks to the guidelines of Ayatollah Khamenei.

He said the Palestinian Islamic Jihad resistance movement was currently in an appropriate situation in all fields and was making progress, despite all the attempts being made by the enemies and their allies to undermine the Palestinian group.

He said the situation inside Palestine was “good,” too, adding, “The Israelis are today affected by the power of the Islamic Republic of Iran and resistance forces and are encircled from all sides.”

Nakhalah hailed Iran’s stance and Ayatollah Khamenei’s guidelines in support for the Palestinian people’s cause of freedom from Israeli occupation, emphasizing that the enemies and the United States have adopted a “very weak” policy in the face of the Islamic Republic’s power.

Iran plays a very important and effective role in the developments inside and outside the country and is now more powerful in comparison with the past, he said.

Velayati, for his part, said Iran maintained “close and serious” contacts with the Islamic Jihad and the entire Palestinian resistance front.

The Leader’s aide highlighted the significance of visits by officials of neighboring states to Tehran, which are indicative of Iran’s power in the region.

In a meeting with Nakhala on Tuesday, Iranian Foreign Minister Hossein AmirAbdollahian reaffirmed the Islamic Republic’s commitment to the Palestinian cause, saying Tehran will continue to support the oppressed Palestinian nation against the expansionist policies of the “apartheid” Zionist regime.

Kamal Kharrazi, the head of Iran’s Strategic Council on Foreign Relations, also told the Palestinian official that Israel has been caught off guard and is encircled by the resistance front, adding that normalization of ties between the Tel Aviv regime and some Arab states laid bare relations that had developed behind the scenes.