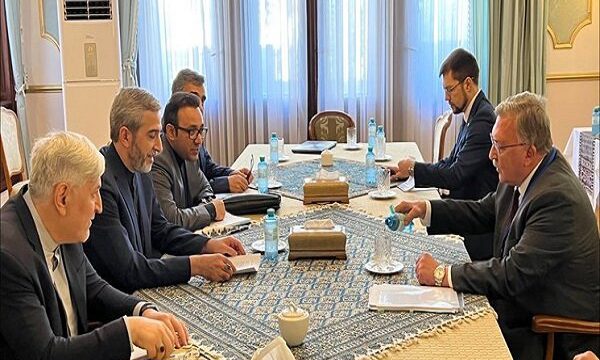 At the threshold of new round of talks on removal of anti-Iranian sanctions, Iranian and Russian top negotiators, headed by Ali Bagheri Kani and Mikhail Ulyanov, discussed JCPOA in Austrian capital of Vienna on Thursday.

Iranian negotiating delegation, headed by Ali Bagheri Kani, arrived on in Austrian capital of Vienna on Thursday morning to attend the new round of nuclear talks on the removal of anti-Iran sanctions.

Earlier on Wednesday, Iranian Foreign Ministry Spokesman Nasser Kan’ani announced that this round of talks will be held as before with the coordination of the European Union.

In a tweet late on Wednesday, Iran’s chief negotiator Ali Bagheri Kani wrote, “Heading to Vienna to advance the negotiations. The Onus is on those who breached the deal & have failed to distance from ominous legacy.”

“The US must seize the opportunity offered by the JCPOA partners’ generosity; ball is in their court to show maturity & act responsibly,” he added.