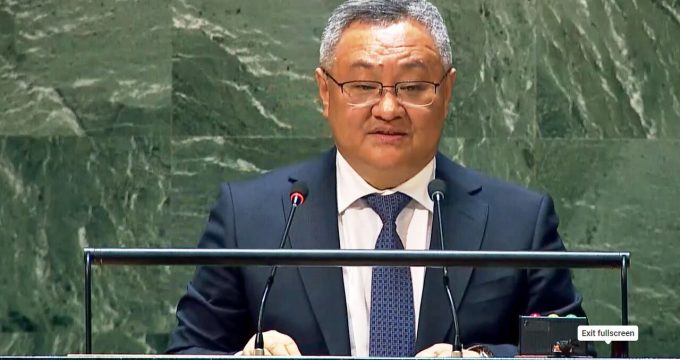 China urges US to lift illegal sanctions against Iran

Director-General of the Department of Arms Control of the Chinese Foreign Ministry Fu Cong called on the United States to lift illegal sanctions against Iran.

Fu made the remarks addressing the Tenth Review Conference of Parties to the Treaty on the Non-proliferation of Nuclear Weapons.

“We need to adhere to the direction of political settlement in addressing the challenges of nuclear-proliferation”,  he said, adding, “All parties concerned should stay committed to bringing the JCPOA back on track at an early date through diplomatic negotiations, and reject the practices of pressuring with sanctions and threat of force.”

“The U.S. should completely lift its relevant illegal sanctions on Iran and long-arm jurisdiction measures on third parties. On that basis, Iran should return to full compliance with its nuclear commitments.”

China is ready to cooperate with all countries to reinforce the Treaty on the Non-Proliferation of Nuclear Weapons (NPT) and will not be the first country to use nuclear weapons under any circumstances.

Earlier, Iran’s Foreign Minister Hossein Amirabdollahian had said that feeding gas into hundreds of new-generation centrifuges was a response to the United States’ action.

He said that the parties were preparing for a new round of talks several weeks ago, but the US suddenly proposed a resolution in the International Atomic Energy Agency to force Iran to make concessions at the negotiation table.

Iran-China relations, JCPOA, new US sanctions against Iran August 3, 2022
How about in your company? How much attention is given to education?
Iranian, Russian chief negotiators discuss JCPOA in Vienna