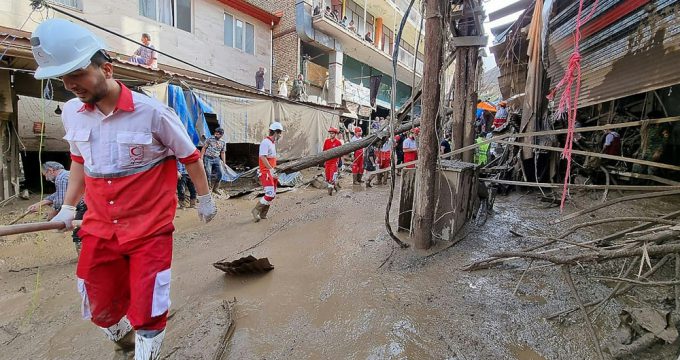 Iran’s Foreign Ministry spokesman has slammed the fresh round of US sanctions targeting the country’s oil sales, saying the bans reveal Washington’s “pseudo-sympathy” towards the victims of recent flash floods across Iran.

Nasser Kan’ani made the comments on Tuesday, a day after US Treasury and State Department imposed sanctions on a total of six companies, four based in Hong Kong, one in Singapore, and one in the United Arab Emirates (UAE).

The US said the firms have helped Iran sell tens of millions of dollars in oil and petrochemical products to East Asian countries.

“The sanctions imposed at the time when Iranians suffered a great loss due to the recent flash floods clearly reveal the wiliness and pseudo-sympathy of the US special envoy for Iran,” Nasser Kan’ani said on Tuesday.

In a message released on Friday, the top American diplomat, Robert Malley, extended his condolences to the victims of the devastating floods.

“My condolences and thoughts go out to the victims and their loved ones affected by the devastating flash floods and landslides throughout Iran,” he wrote on his Twitter account.

Kan’ani, however, said that the current US administration’s attitude towards Iran does not differ from its predecessor, adding that the White House’s addiction to imposing sanctions and using them as political leverage exposes the United States’ imperialistic nature.

US President Joe Biden’s administration has repeatedly dismissed the Donald Trump administration’s “maximum pressure” campaign against Iran as a failure but they have been pursuing and even expanding the same failed policy in practice, he said.

“[The US] is not giving up on following the pointless and disastrous policy even during the process of current efforts to resume talks on reviving the [nuclear] deal either,” Kan’ani stated.

Iran will promptly and firmly react to the White house’s consistent imposition of sanctions and take necessary measures to nullify their possible detrimental impacts on the country’s trade and economy, the spokesman added.

Back in May 2018, Trump unilaterally pulled the US out of the nuclear deal, officially known as the Joint Comprehensive Plan of Action (JCPOA), and initiated the so-called maximum pressure campaign against Tehran despite its full compliance with the pact.

While the Biden administration had voiced willingness to undo Trump’s “failed” policy toward Tehran and rejoin the ailing deal, it has retained the anti-Iran sanctions as leverage since talks began last year in Vienna to bring the US back into the deal.

However, Tehran insists that all sanctions must first be removed in a verifiable manner before it reverses the “remedial measures” it has taken in response to the US withdrawal and maximum pressure policy.

Should the US side behave realistically and show the necessary flexibility in the possible fresh rounds of talks, reaching a deal would not be very much inaccessible, he said on Monday.

“Not crossing our redlines in the forthcoming deal is of utmost importance for us,” the foreign minister added.

Ali Bagheri Kani, Iran’s lead negotiator at the talks, also tweeted on Sunday that the Islamic Republic has shared its “proposed ideas, both on substance and form, to pave the way for a swift conclusion of Vienna negotiations.”

“We stand ready to conclude the negotiations in a short order, should the other side be ready to do the same,” the top diplomat declared.