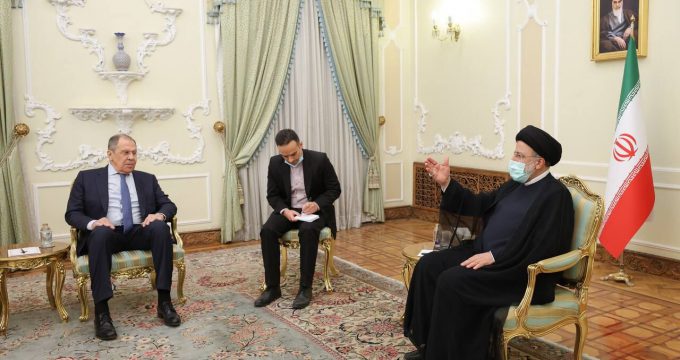 Iranian President Ebrahim Raisi says he is certain that Syria will have a bright future ahead, hailing the Syrian people’s perseverance and resistance in the face of eleven years of foreign-backed war in their country.

Echoing Leader of the Islamic Revolution Ayatollah Seyyed Ali Khamenei’s remarks, the president said the Americans have no option but to withdraw from Syria.

“America’s withdrawal from east of the Euphrates and the entire region is the fundamental solution to the crises in West Asia,” he noted.

Raisi also underlined the need for the Syrian army to regain its control over all of the borders of the Arab country.

“Syria’s national sovereignty must be respected,” he said, adding that ignoring the issues he mentioned will cause various threats.

For his part, the top Syrian diplomat conveyed President Bashar al-Assad’s greetings to Iran’s leaders and appreciated Tehran’s hosting of the latest round of talks to establish peace in his country.

“The comments of Iran’s president and the Leader of the Islamic Revolution are indicative of an alliance between Tehran and Damascus,” Mekdad said, according to a readout of the meeting provided by the Iranian president’s official website.

Earlier in the day, Mekdad met with his Iranian counterpart Hossein Amir Abdollahian. During a press joint press briefing after the meeting, the Syrian foreign minister asserted that “nothing can threaten Syria’s independence and sovereignty.”

He said breaching the Arab country’s borders “carries no benefits for either Turkey or others,” while warning against the “Turkification” policy of Ankara and its support for anti-Syria terrorists.

Amir Abdollahian also expressed concern regarding a fresh potential Turkish invasion of northern Syria under the pretext of fighting “terrorists.”

“We hope that these pieces of advice that were emphasized by the heads of state attending the summit are heeded by the authorities of the friendly and brotherly country Turkey” so Damascus and Ankara would be able to cross this stage in the absence of any confrontation, he added.

Turkey has carried out several incursions against neighboring Syria’s northern parts since 2016 to target the Kurdish militants known as the People’s Protection Units (YPG).

Ankara associates the YPG with the Kurdistan Workers’ Party (PKK), which has been fighting a separatist war against Turkey for decades.

So far, Turkey has deployed thousands of troops in the areas, in what Damascus has decried as an outright violation of its sovereignty.

As he met his Russian and Iranian counterparts at the Tehran trilateral summit as part of the Astana peace process, Turkey’s President Recep Tayyip Erdogan renewed warnings that Ankara could launch a new military operation in northern Syria.

Erdogan said Turkey wants more help from Russia and Iran, but stressed Ankara can fight against “terrorist” organizations without needing any support.