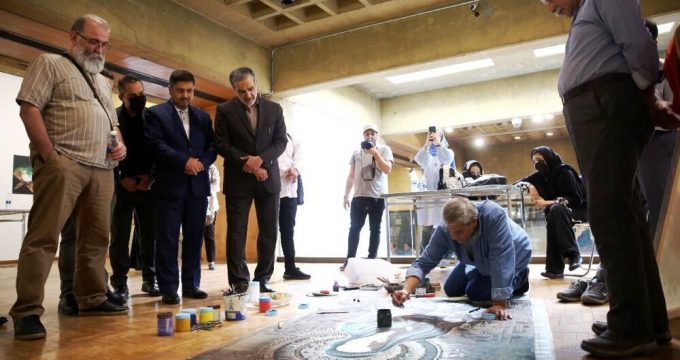 An art exhibition opened on Friday at Tehran’s Niavaran Culture Center to celebrate Eid al-Ghadir, the day on which Imam Ali (AS) was appointed as successor to the Prophet Muhammad (S).

The exhibition is being organized with contributions from the Visual Arts Office of the Ministry of Culture and Islamic Guidance and several others organizations.

“In the great religion of Islam, Ghadir is God’s greatest feast,” Visual Arts Office director Abdorreza Sohrabi said during the opening ceremony of the exhibition.

“It is our religious duty to exploit all our capability to introduce and clarify the great feast,” he added.

“Art is the most powerful means for introducing and clarifying the story of Ghadir, which has been represented in the best artistic way in the artworks on view at the exhibition,” he stated.

The artworks have been selected from the treasure trove of Iran’s Institute for Development of Contemporary Visual Arts.

Dozens of artists are also holding workshops during the exhibition.

Eid al-Ghadir will also be observed in an art project initiated by Tehran Municipality’s Beautification Organization.

Artists such as Hassan Ruholamin, Ali Bahreini, Mostafa Gudarzi and Hassan Jafarinia have been hired to produce murals on Imam Ali (AS) along the Imam Ali (AS) Highway.

The murals will be unveiled on Eid al-Ghadir, which will fall this year on July 18.

Ruholamin, who is best known for his works illustrating stories from the history of Islam, is participating in this project with two works, one of which is “The Conqueror of Khaybar” originally produced in 2018.

This painting depicts Imam Ali (AS) removing the door of the enemy’s fort in the Battle of Khaybar, which was fought in the year 629 between Muslims and the Jews living in the oasis of Khaybar, located 150 kilometers from Medina in the northwestern part of the Arabian Peninsula in modern-day Saudi Arabia.