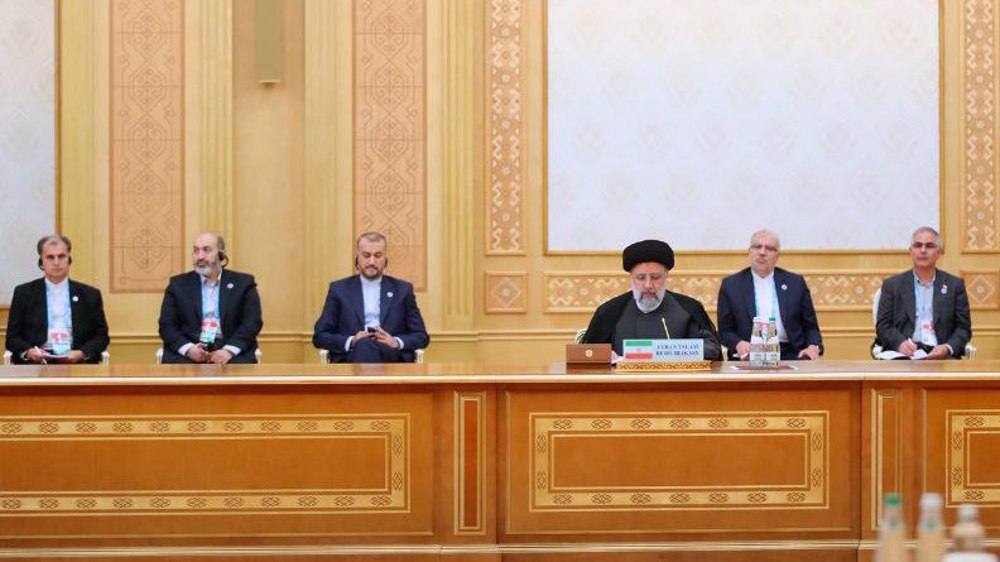 Iran president calls on Caspian states to step up cooperation

Iran’s President Ebrahim Raisi has told a summit of the Caspian presidents in Ashgabat that cooperation among the littoral states has become increasingly important in light of international developments.

“This interaction will not only lead to economic prosperity and increase the welfare of our nations, but also strengthen regional peace and stability and solving the problems of the Caspian Sea zone merely through its coastal countries,” he said in Turkmenistan’s capital Wednesday evening.

Raisi welcomed initiatives presented by the presidents of the Caspian Sea to develop economic cooperation in various fields.

Iran, he said, considers the Caspian as a sea of peace and friendship and declares its readiness for comprehensive cooperation based on mutual respect and interests.

“The Caspian Sea, our common heritage and capital, the axis of bonds and friendship, and the source of blessings for more than the 270 million people of its coastal countries, which reflects the five countries in the mirror of a single water area.

“Just as our civilizing fathers and cultured mothers have enjoyed peace and prosperity on these shores and in the region for thousands of years, so our nations, as permanent seaside neighbors, must have a long-term approach towards the Caspian Sea as a sea of friendship and cooperation so that we have fulfilled our responsibility towards the current and future generations.”

Raisi said the cultural convergence of the Caspian Sea littoral states is one of the main priorities that guarantees cooperation and friendship in the long run and strengthens it in the hearts of nations.

“The Islamic Republic of Iran proposes that this spiritual heritage be preserved and strengthened by institutionalizing and holding joint socio-cultural programs.”

Raisi said as countries are interconnected through the Caspian Sea, they have many obligations towards this body of water.

“Protection of the fragile environment, reasonable use of living resources, responsible activities for the exploitation of the mineral resources of the Caspian Sea with the aim of economic development and promoting the welfare and security of our peoples and respect for each other’s sovereignty, rights and competence in this water area are part of these rights and responsibilities.”

Raeisi said the littoral states’ consensus on the key principle of their competence to resolve Caspian issues is a beacon that guides cooperation among them and ensures their mutual benefits.

This “closes the way for third and non-Caspian parties to intervene in issues related to the Caspian Sea or to commit aggression and other actions against any of the littoral states, and can prevent possible unpleasant incidents,” he said.

“Therefore, it is necessary for us, as the Caspian littoral states, to preserve the Caspian Sea region as a ‘region of peace and friendship’ by emphasizing five-sided cooperation and avoiding unilateral actions, relying on existing capacities and expanding cooperation, and pay serious attention to the long-term interests of the region and its coastal countries and observing the ‘principle of unanimity’ in all decisions related to the Caspian Sea.”

Raisi touched on the Convention on the Legal Status of the Caspian Sea signed in Aktau, Kazakhstan in 2018 after two decades of negotiations, saying its implementation can pave the way for more cooperation between the littoral states as well as wider activities in the Caspian Sea.

This requires delineating borders, and specifying the rights of the littoral states with respect to the seabed and under seabed as well as water levels in different parts of the sea.

“In this regard, the finalization of the agreement on how to draw the lines of origin is important, and the Islamic Republic of Iran has always stated, including in the interpretative declaration after the signing of the convention, that this is a significant and decisive importance for Iran as a country with “a clear unfavorable coastline,” President Raisi said.

The president said with the easing of the coronavirus restrictions, Iran has seen a significant increase in political and economic interactions with the Caspian Sea littoral states.

“Due to its geographical location and suitable infrastructure, the Islamic Republic of Iran is ready to provide transit and access to the Caspian Sea littoral states to other countries and regions, especially Iranian ports in the Persian Gulf and the Gulf of Oman through its territory.

“Also, cooperation in the field of export and swap of oil and gas, electricity, minerals and agricultural products is one of the items on the agenda of our negotiations with neighboring countries in the Caspian Sea in recent months, and good agreements have been reached in these areas, which promises a new era of strategic cooperation,” he said.