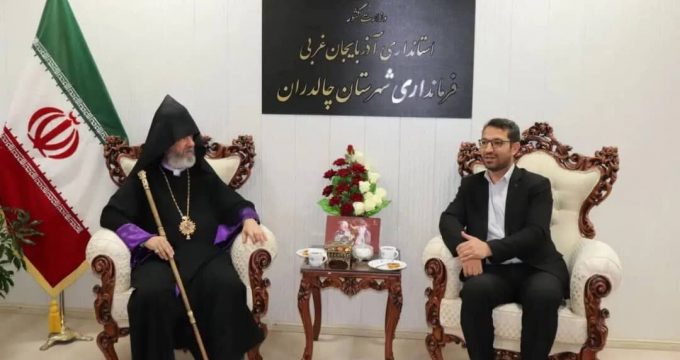 Grigor Chiftchian, the archbishop of Armenians in Azerbaijan, has ruled out allegations made by enemies regarding the rights of followers of religions in Iran, saying that followers of all religions and sects have the freedom to perform religious rituals.

The archbishop made the remarks in a meeting with the governor of Chaldoran County on Sunday, expressing gratitude to authorities of the Islamic Republic, who paved the way for holding religious ceremonies at Saint Thaddeus Cathedral in West Azarbaijan Province.

The enemies of the Islamic Republic of Iran have always attempted to portray the country as a violator of human rights while followers of religions in Iran are free to conduct their rituals, Archbishop Chiftchian said.

In the meeting, Governor of Chaldoran Mohammad-Reza Abdollahnejad pointed to the fact that the Islamic Republic attaches great importance to the rights of followers of religions and sects, adding that there is complete freedom for followers of all divine religions in today’s Iran, so the followers can easily perform their religious ceremonies.

Iranian-Armenians hold their rituals freely at Saint Thaddeus Cathedral every year, Abdollahnejad said, noting that this year’s ceremony will be held with the help of governmental service providers in July.

The archbishop thanked the governor for all the support provided by government authorities to hold the annual ceremony.

The annual Badarak religious ceremony is held in Chaldoran. Badarak, which is observed every year on the anniversary martyrdom of Saint Thaddeus, is held at the Qara Kelisa – also known as the Monastery of Saint Thaddeus – is believed to be the world’s oldest church dating back to the 7th century.

Armenian people from different countries participate in the ritual which has been observed since 1954.

The Saint Thaddeus Cathedral was inscribed on UNESCO’s World Heritage list on July 7, 2008.