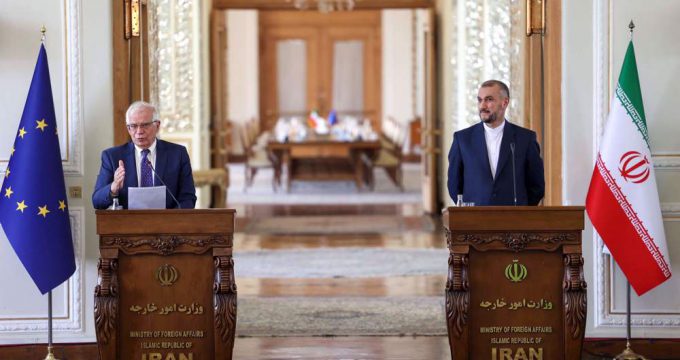 Iranian Foreign Minister Hossein Amir Abdollahian says Tehran is ready to resume the stalled talks with the P4+1 group of countries in Vienna to revive the 2015 deal that the US abandoned in defiance of international criticism.

Amir-Abdollahian made the remarks in a joint press conference with the European Union foreign policy chief, Josep Borrell, in Tehran on Saturday as the bloc seeks to break an impasse between the parties to the deal, officially known as the Joint Comprehensive Plan of Action (JCPOA), over the agreement’s revival and the removal of sanctions against Iran.

“We are ready to resume the Vienna talks within the next days,” Iran’s top diplomat said.

He expressed hope that the US would “this time” pursue a “realistic and fair approach” and act responsibly.

Iranian officials do not directly negotiate with Americans as the United States unilaterally withdrew from the deal in 2018 and re-imposed sanctions against Iran. During the talks in Vienna, which have been on hold since mid-March, US negotiators communicated with Iranians through European intermediaries.

The Iranian foreign minister said he held “detailed, precise and deep” talks with Borrell on the JCPOA revival negotiations, adding, “We are going to break the stalemate in the Vienna talks and end the tension that has existed in recent days.”

Borrell, for his part, said talks on reviving the JCPOA will resume soon in the coming days.

“We are expected to resume talks in the coming days and break the impasse. It has been three months and we need to accelerate the work. I am very happy about the decision that has been made in Tehran and Washington,” the top EU diplomat said.