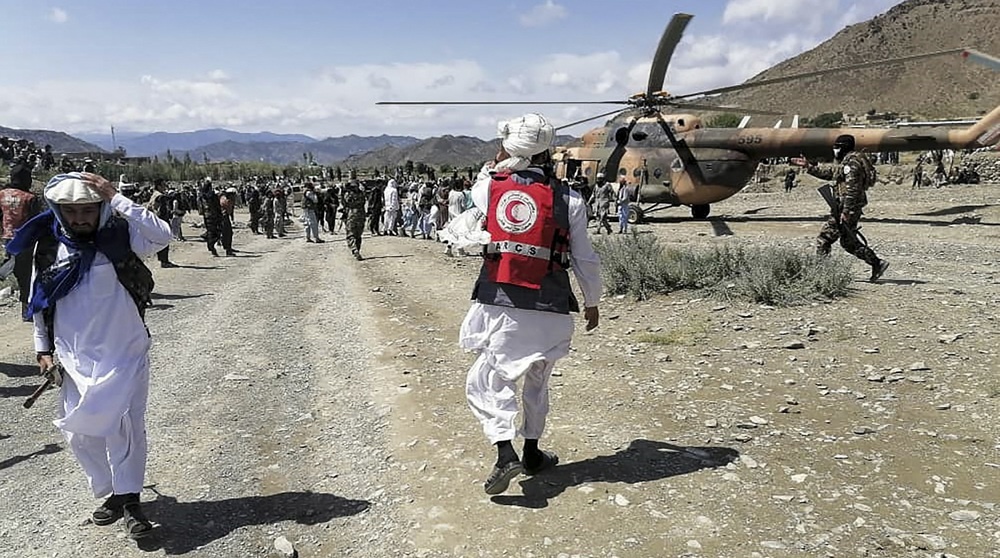 Following the devastating earthquake in Afghanistan on Wednesday, which has so far claimed more than 1,000 lives, Iran expressed condolences and pledged full support to the neighboring country.

Iranian embassy in Kabul, in a tweet, offered its condolences to the people of Afghanistan, saying it has dispatched two cargo planes carrying first aid supplies to the quake-hit country.

It said that relief and rescue teams of Iran’s Red Crescent Society (IRCS) as well as medical and volunteer squads have been put on standby to be deployed to Afghanistan.

“Search, rescue teams, emergency medical services, rescue workers, volunteers, and medical staff of the IRCS are fully prepared to be sent to Afghanistan if requested by the government,” the embassy said.

Earlier on Wednesday, Iran’s foreign ministry spokesman Saeed Khatibzadeh issued a statement expressing condolences to the families of victims and praying for the full recovery of the wounded.

Ali Bahadori-Jahromi, the spokesman for the Iranian government, also issued a statement saying Iran would stand by the people of Afghanistan in this hour of distress and provide the necessary aid.

The death toll has already surpassed 1,000, with at least 1,500 others injured. According to officials, the casualty toll is likely to mount as the search operation continues.

The 6.1 magnitude earthquake struck about 44 km (27 miles) from the city of Khost, near the Pakistani border, early on Wednesday.

The United States Geological Survey later said the magnitude was 5.9, which struck the region on the country’s border with Pakistan, flattening homes and leaving people trapped under the debris.

The caretaker government in Kabul has called on the international community and global charities to help those affected by the massive quake.

Taliban spokesperson Zabiullah Mujahid said the government had convened an emergency cabinet meeting to discuss a response to the massive earthquake.

“In addition to helping the people affected by the earthquake, all relevant organizations were tasked to send rescue teams,” he said.

Taliban’s deputy state minister for natural disaster management, Mawlavi Sharfuddin Muslim said that the death toll is expected to rise as the earthquake has also struck far away remote areas.

This is the deadliest earthquake to hit the landlocked country sitting in the lap of the Hindukush Mountains since 2002 when a magnitude-6.1 earthquake killed around 1,000 people in northern Afghanistan.

Before that, in 1998, a magnitude-6.1 earthquake and following tremors in northeast Afghanistan resulted in the death of at least 4,500 people.

Many countries in the neighborhood of Afghanistan offered their condolences over the catastrophic calamity.

Pakistan’s President Arif Alvi said his country stands in solidarity with the people of Afghanistan in this hour of need.

“I am saddened over the loss of precious lives by an earthquake in Afghanistan & express my sympathies with the affected,” Alvi wrote in a tweet.

Shehbaz Sharif, the prime minister of Pakistan, said relevant authorities are “working to support Afghanistan in this time of need.”

India’s foreign ministry spokesman Arindam Bagchi also expressed his sympathies to the victims and their families, as well as all those impacted by the tragic incident.

“We share the grief of the people of Afghanistan and remain committed to providing assistance and support in this hour of need,” Bagchi said via Twitter.

China also expressed sympathies with the bereaved families and the injured.

Chinese foreign ministry spokesman Wang Wenbin said that China was “ready to provide emergency humanitarian assistance to Afghanistan in light of its need.”

World Health Organization (WHO) director general Tedros Adhanom Ghebreyesus in a tweet said the world health body will “continue supporting people in need across the country”.

“My thoughts and prayers are with people in #Afghanistan who have been affected by the earthquake this morning, especially those who lost loved ones,”

Afghanistan has been battling a worsening humanitarian crisis since the botched exit of US-led allied forces last August followed by a freeze on Afghanistan’s national assets worth over 9 billion USD.

The earthquake threatens to further compound the misery of people in the crisis-stricken South Asian country.