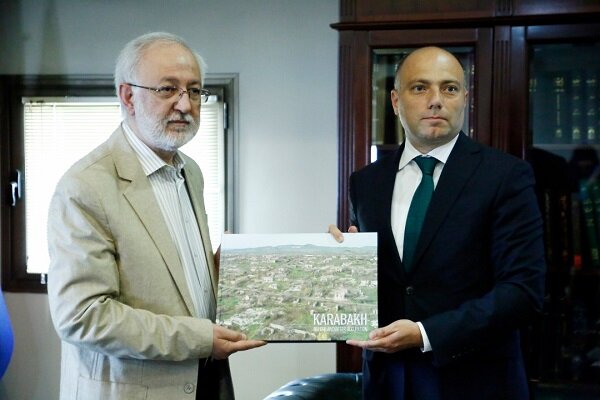 Head of the National Library and Archives of Iran Alireza Mokhtarpour and Anar Karimov, Minister of Culture of the Republic of Azerbaijan in a meeting discussed developing Iran-Azerbaijan cultural ties.

Referring to the long history of cooperation between the National Library and Archives of Iran and the Republic of Azerbaijan, Mokhtarpour called for establishing working groups to implement the signed MoUs between the two organizations.

“The National Library and Archives of Iran will cooperate with the Republic of Azerbaijan. These two countries have always been friends and companions throughout history,” he added.

Karimov, for his part, described the Iranian national library as a valuable treasure and called for developing cooperation.

At the end of the meeting, the commemorative plaque of the National Library of Iran along with exquisite Iranian artwork was presented to the Minister of Culture of the Republic of Azerbaijan.

The Azeri culture minister also held meetings with Iranian officials during his visit to Iran, including his Iranian counterpart and the Iranian tourism minister Ezzatollah Zarghami.