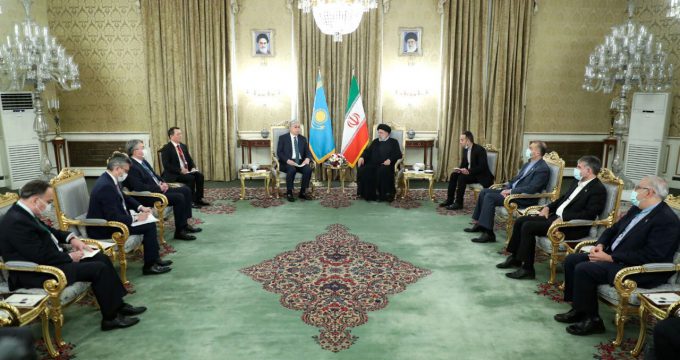 Iran president: Presence of foreigners source of problems, does not bring security to region

Iranian President Ebrahim Raisi says the presence of foreigners does not bring security to the West Asia region, stressing that regional countries are fully capable of solving their own problems.

Raisi made the remarks in a Sunday presser with visiting Kazakh President Kassym-Jomart Tokayev in Tehran.

During the press conference, Raisi stressed that Iran and Kazakhstan have similar views on global and regional issues, including the situation in Afghanistan and the need to form an inclusive government there.

“We agree that the presence of foreigners in the region will not create security, but rather, it will cause many problems. We also believe that regional officials are capable of solving regional problems and that the region’s [Gordian] knots can be untied by the region itself,” he said.

The Iranian president noted that talks with his Kazakh counterpart earlier in the day paved the ground for the strengthening of bilateral cooperation, saying the two countries are determined to expand their ties at bilateral and regional levels.

Raisi added that Tehran and Nur-Sultan have the capacity to enhance their cooperation in regional organizations such as the Shanghai Cooperation Organization (SCO) and the Eurasian Union.

“For the Islamic Republic of Iran, cooperation with its neighbors in the Caspian Sea is a priority, and we seek to increase cooperation in this field,” Iran’s chief executive emphasized.

In addition to regional cooperation, he said, Iran and Kazakhstan are determined to take steps to upgrade their relations in international organizations.

The Kazakh president, for his part, said his country has succeeded in strengthening cooperation with Iran in various fields, including the cultural sector and regional issues.

Both countries are keen to speed up the transit of goods, Tokayev said, adding that the East-West and South-North transportation corridors play a leading role in this regard.

Also on Sunday, Iranian and Kazakh officials signed nine cooperation documents and memoranda of understanding to expand relations in various fields in the presence of Raisi and Tokayev.

Based on the documents, the two countries will improve their cooperation in the fields of transit transportation, scientific and cultural exchanges, energy, agriculture, politics, trade, and economy.

Kazakhstan, a major oil and uranium producer, is part of the China-led eight-member bloc, better known as the Shanghai Cooperation Organization, which also includes Iran, Russia, India, and Pakistan.

Last year, during a meeting between Raisi and his Kazakh counterpart on the sidelines of an SCO summit in Tajikistan, the two sides agreed to strengthen bilateral relations, including cooperation to better facilitate rail freight transport, which would speed up the transit of goods between the two nations.

The latest visit comes on the heels of various official trips to Iran by the world’s high-profile leaders aiming to expand ties with Tehran in the face of Western unilateralism and its sanctions policy.