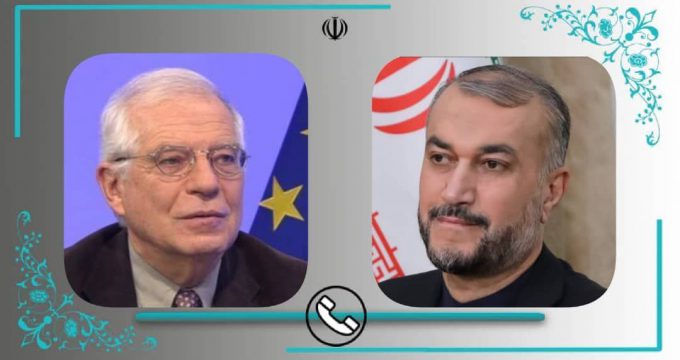 Foreign Minister Hossein Amir Abdollahian has once again reiterated Iran’s willingness to hold result-oriented talks with the P4+1 group of countries on the revival of the 2015 deal, promising a “proportionate” response to the US’s “unconstructive” approach.

In a phone conversation with European Union foreign policy chief Josep Borrell on Saturday, Amir Abdollahian slammed the “unconstructive and hasty” move by the United States to propose an anti-Iran resolution, which was passed during a recent meeting of the International Atomic Energy Agency (IAEA)’s Board of Governors.

“Tehran has always welcomed rational and result-oriented negotiations, but in order to reach a good and lasting agreement, it is necessary for the other side to give up its double standards and contradictory behavior,” the top Iranian diplomat said.

“After the resolution was passed in the IAEA’s Board of Governors, we showed that we will not back down from the nation’s rights, and if the United States wants to continue its unconstructive behavior, it will face our proportionate response,” he emphasized.

The Iranian foreign minister added that the Islamic Republic still believes that “diplomacy is the best and most appropriate” solution to the outstanding issues on the revival of the deal, officially known as the Joint Comprehensive Plan of Action (JCPOA).

“Iran has never distanced itself from the negotiating table. For this reason, we have always presented important initiatives in the talks in order to reach a favorable  agreement, but negotiations must be fruitful,” Amir Abdollahian pointed out.

Negotiations have been held in the Austrian capital of Vienna since April last year to restore the JCPOA, which was ditched by former US President Donald Trump in May 2018.

In quitting the agreement, Trump introduced what he called the “maximum pressure” campaign to bring Iran to its knees. Tehran maintains that the policy has failed dismally. The Biden administration agrees, yet it has not taken any tangible steps to deliver on its promise of repealing the policy.

Meanwhile, in a recent politically-motivated decision, the IAEA’s Board of Governors has passed a resolution, proposed by the US and the three European parties to the JCPOA – Britain, France, and Germany, which accuses Tehran of failing to fully cooperate with the UN nuclear agency.

In a post on his Twitter account on Friday, the Iranian foreign minister called for an end to the United States’ “sanctions lunacy” and the IAEA’s “politicized approach” over the country’s nuclear program.

Amir Abdollahian emphasized that the Islamic Republic would “NEVER hesitate to neutralize sanctions.”

The senior EU official, for his part, said he would continue to play a positive role in helping all parties to the JCPOA reach a final agreement and stressed the importance of pursuing diplomacy and avoiding unconstructive measures in this regard.

He asserted that Iran is firmly determined to reach a good and lasting deal that aims to salvage the JCPOA, and said the sides are not far from reaching an agreement in Vienna.

Now is the time to immediately resume the Vienna talks and make efforts to prevent escalation of tensions, Borrell said.

He expressed his readiness to make every effort necessary to help Iran and the five remaining parties to the JCPOA reach a final agreement.