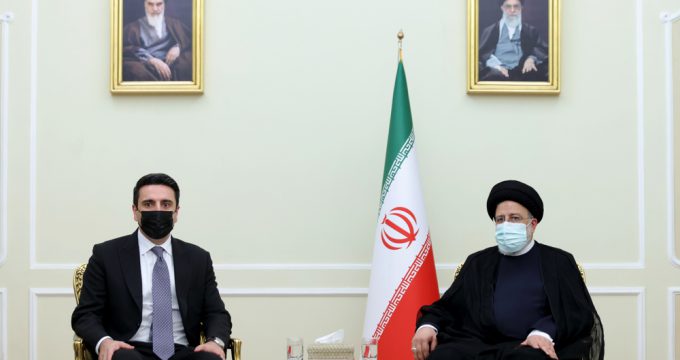 Iranian President Ebrahim Raisi says the presence and interference of foreign powers in the region cannot solve problems, describing dialog among regional countries as the sole solution to the existing issues.

“In terms of geopolitics, the Islamic Republic of Iran has a high capacity, which prepares the ground for boosting regional convergence and promoting peace and welfare among regional nations, from the Indian Ocean and the Persian Gulf to the Black Sea and Europe,” Raisi said in a meeting with President of Armenia’s National Assembly Alen Simonyan in Tehran on Wednesday.

He said Iran’s principled stance is to support the territorial integrity and national sovereignty of all countries in the region.

“The Islamic Republic of Iran supports any plans, interactions or dialog focused on the role of regional countries for ensuring peace and tranquility,” the Iranian chief executive said.

He reiterated Iran’s determination to boost ties with neighboring and friendly countries such as Armenia and added that Tehran and Yerevan enjoy high capacities for the enhancement of cooperation in the fields of transportation, energy, industry and exports of technical, engineering and agricultural services.

Raisi noted that parliamentary interactions between the two countries also plays an “effective and constructive” role in enhancing mutual relations, urging the Iran-Armenia joint economic commission to take practical steps in this regard.

The Armenian National Assembly president, for his part, said his country attaches great importance to economic, trade and transit ties with Iran given the two countries’ great capabilities to boost relations in various fields.

Simonyan hailed Iran’s constructive stance on regional issues and expressed hope that Tehran would play a more active role in the future developments.

Iran has always given priority to interaction and dialog with the neighboring and regional states and made efforts to seriously pursue and achieve such a goal by maximizing the existing capacities and optimizing bilateral ties.

In a phone call with his Armenian counterpart Vahagn Khachaturyan earlier this month, Iran’s President Ebrahim Raisi warned against Israel’s plot to infiltrate into the region, urging regional nations to remain fully cautious in the face of the Tel Aviv regime’s attempts to gain a foothold there.

Raisi said the Zionist regime is by no means a friend of the regional nations.