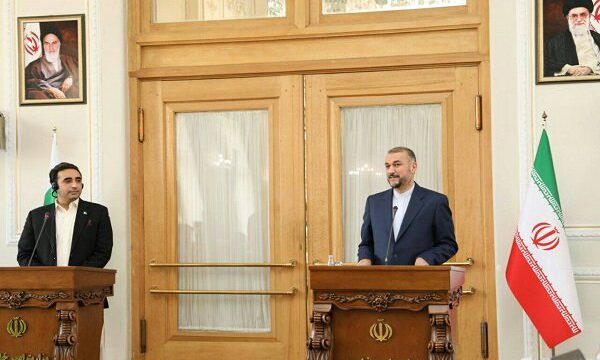 Iranian Foreign Minister said that Iran has never escaped the negotiating table and believes that negotiation and diplomacy are the best way to reach an agreement.

Speaking in a joint press conference with his Pakistani counterpart, Bilawal Bhutto Zardari, who arrived in the Iranian capital of Tehran on Tuesday, Hossein Amir-Abdollahian said that the two sides discussed bilateral relations and various fields of cooperation between Iran and Pakistan, including the development of cultural, tourism, political and economic cooperation.

He added that the two sides also discussed the latest developments in Afghanistan, Ukraine, Yemen and Palestine.

Iran opposes the war in Ukraine and believes that the negotiations and a political solution are the only solutions to the crisis, he said.

He also expressed hope that Afghanistan will be on the path of peace, tranquility and stability.

Referring to the anti-Iranian resolution issued at the Board of Governors of the International Atomic Energy Agency, Amir-Abdollahian said that the Islamic Republic of Iran has never escaped the negotiating table and believes that negotiation and diplomacy are the best way to reach an agreement.

“We have taken important steps in recent months in the negotiations between Mr. Bagheri and Mora and the P4 + 1 countries. The exchange of messages between the Islamic Republic of Iran and the United States during this period also proved that we emphasize dialogue, logic and reaching a good and lasting agreement,” he added.

In recent days, despite the messages exchanged and the progress made in the Vienna talks, the American side suddenly submitted a resolution to the International Atomic Energy Agency to gain more concessions, the Iranian FM noted. “We put a new political package on the table, the Americans accepted the initiative but insisted on passing the resolution. Iran stepped up its nuclear activities, which were notified to the IAEA prior to the resolution.”

Pakistani foreign minister, for his part, said that Iran is an important neighbor of Pakistan, adding that his country is seeking to develop relations with Iran.

Pakistan is eager to see the day when the JCPOA is finalized which creates a more favorable atmosphere for interaction with Iran.