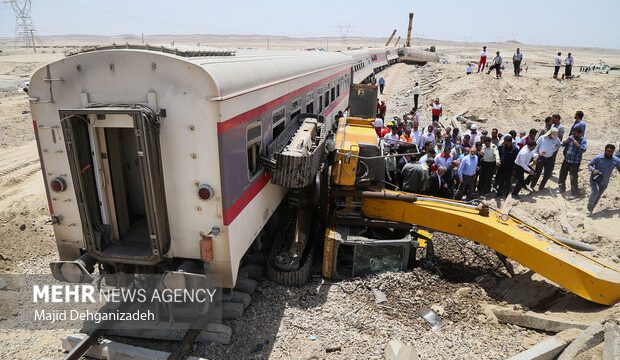 Human error said to have caused railway accident in Iran

Iranian officials have said a human error by an excavator driver was to blame for the deadly derailment of a train in the northeast of the country on Wednesday morning.

The Chairman of the High Commission for Accidents Mohammad Hassan Esmaili said that an investigation into the cause of the derailment of Mashhad-Yazd passenger train is still underway, while adding that “the excavator driver had not kept away his vehicle’s safe distance from the railway for unknown reasons and caused the incident.”

Esmaili told Iranian media that “the railway contractor was rebuilding the traverse rail system and for that reason an excavator was present at the site of the incident.”

He added that the excavator driver is in critical condition and cannot explain what exactly went wrong.

The official further said that investigations are still ongoing into the reason why the 3-meter safe distance from the rail line by the excavator driver was not observed.

He pointed out the excavator was not on the railway and it was its boom that may have caused the incident while the driver was trying to get the machine away from the rail line.

A day of mourning has been declared for tomorrow in Yazd, the destination of the derailed train.

At least 22 people were killed in the incident so far, while dozens more were injured, with some in critical condition.

So far, 6 people have been interrogated and sued by the judicial authorities over the deadly train derailment.