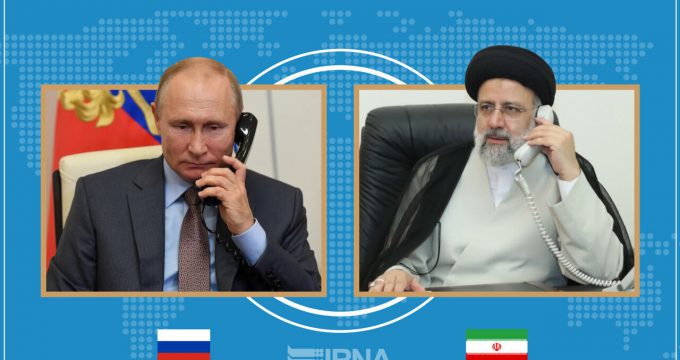 Iran’s President Ebrahim Raisi has said that cooperation among independent states in line with protecting collective interests at regional and international levels will nullify pressures and provocations by other international players.

Raisi made the comment during a phone call with his Russian Counterpart Vladimir Putin on Wednesday.

The Iranian president said that his country is seeking to deepen its ties with independent countries in all fields, regardless of what’s happening in the world.

He also expressed hope that the Ukraine war would come to an end as soon as possible.

President Raisi stressed the importance of a diplomatic solution to the war and announced Iran’s readiness to help find such a solution.

The two presidents also discussed Moscow-Tehran relations, as well as fight against terrorism, and pledged to continue the anti-terror cooperation in light of successes achieved so far.

Putin, for his part, said that both Iran and Russia are actively working to boost their economic and trade cooperation, adding that the level of that cooperation has now increased by 80%.

The Russian president also expressed support for the role Iran is making in international organizations such as the Shanghai Cooperation Organization, and described Tehran’s role as beneficial for all countries.

Putin and Raisi discussed the Iranian nuclear program too.

The Iranian president said that his country has fulfilled its commitments under the 2015 nuclear deal, known as the JCPOA, and now it is time for the US to make a decision.

The Russian president referred to the latest anti-Iran resolution pushed by the US and its three European allies; namely, the UK, France and Germany at the International Atomic Energy Agency (IAEA).

Putin said that such measures by the US and its allies will not help resolve issues, and Russia is opposed to these measures.