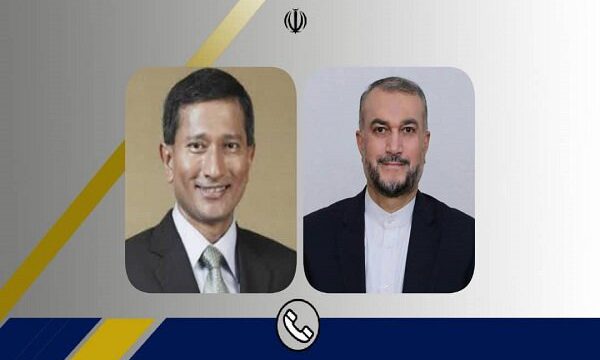 Referring to the appointment of the Iranian ambassador to Singapore and the positive assessment of the relations between the two countries, Amir-Abdollahian stressed Iran’s readiness to develop relations with Singapore.

Referring to the Ukraine crisis, Amir-Abdollahian once again called diplomacy and dialogue a suitable solution to end the crisis.

“The process of technical cooperation between the AEOI with the IAEA and the repeated confirmation by the IAEA of the peaceful nature of Iran’s nuclear program cannot be reversed at once by a hasty political comment,” the Iranian top diplomat stressed in response to a question raised by his Singaporean counterpart.

“During Grossi’s recent visit to Tehran, we reached a mutually agreeable agreement with a positive trend,” he continued, adding that Iran considers political interference in the Agency’s technical affairs completely unconstructive.

Turning to the Vienna talks, the Iranian foreign minister stressed Iran’s seriousness in reaching a good and stable deal, saying that the deal is in reach if all parties adhere to diplomacy and commitments with realism.

Balakrishnan, for his part, called on expanding Iran-Singapore’s ties in all areas, especially in areas of common interests.

The Singaporean Foreign Minister also invited Amir-Abdollahian to visit his country and called the relations between the two countries important.