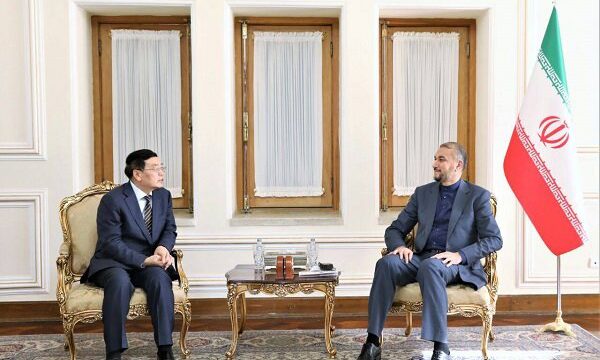 Iranian Foreign Minister Hossein Amir-Abdollahian held a meeting with Cheng Guoping, External Security Commissioner of the Ministry of Foreign Affairs of the People’s Republic of China in Tehran on Tuesday.

According to a readout of the meeting by the Iranian Foreign Ministry’s website, the two sides exchanged views on the latest status of Comprehensive Strategic Partnership signed between Iran and China in late 2020 and its implementation.

The senior Chinese envoy invited Amir-Abdollahian to visit China at the official invitation of the Chinese foreign minister.

Guoping also expressed happiness with the development of strategic relations between the two countries.

The Iranian foreign minister further emphasized the need to strengthen the growing trend of relations, and described cooperation in international organizations as one of the important aspects of bilateral relations, and stressed close consultation in that regard as important.

According to the Iranian foreign ministry’s report, the two sides also exchanged views on regional and international cooperation and other issues of mutual interest.