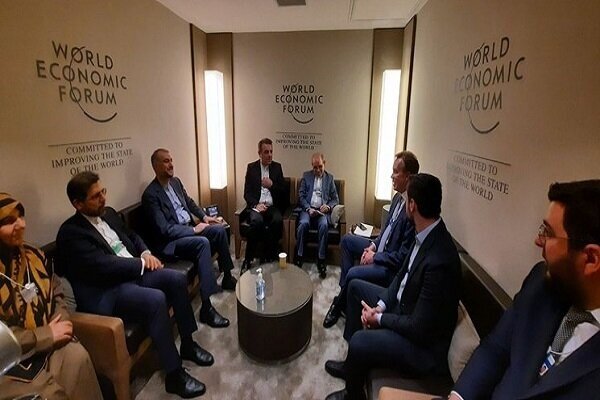 President of the World Economic Forum (WEF) expressed hope that an agreement would reach between Iran and P4+1 group in Vienna.

Børge Brende made the remarks in his meeting with Iranian Foreign Minister Hossein Amir-Abdollahian on the sidelines of meeting of World Economic Forum (WEF) in Davos on Thursday and called using high capabilities of Iran in the revival of economy of world and region more than before.

During the meeting, Iranian foreign minister pointed to the significance of economic diplomacy in Iran’s foreign policy and explained some of prioritized areas of the country in this respect.

Reminding Iran’s excellent capacities in the fields of transportation and transit in regional and international arenas and also high potential of the country in oil and gas fields, Amir-Abdollahian stated that expansion of cooperation and enhancement of trade with neighboring countries is the main priority of foreign policy of the country.

President of World Economic Forum (WEF), for his part, welcomed economic diplomacy of Iran especially expansion of interactions with neighboring countries and stated that senior officials of Persian Gulf littoral states who participated in the Forum have expressed their willingness to expand their economic cooperation with Iran.

Børge expressed hope that talks between Iran and world’s major powers with the aim of removal of anti-Iranian sanctions would reach a final conclusion in Vienna, stressing that Iran’s high capabilities for the revival of regional and international economy must be taken into serious consideration.