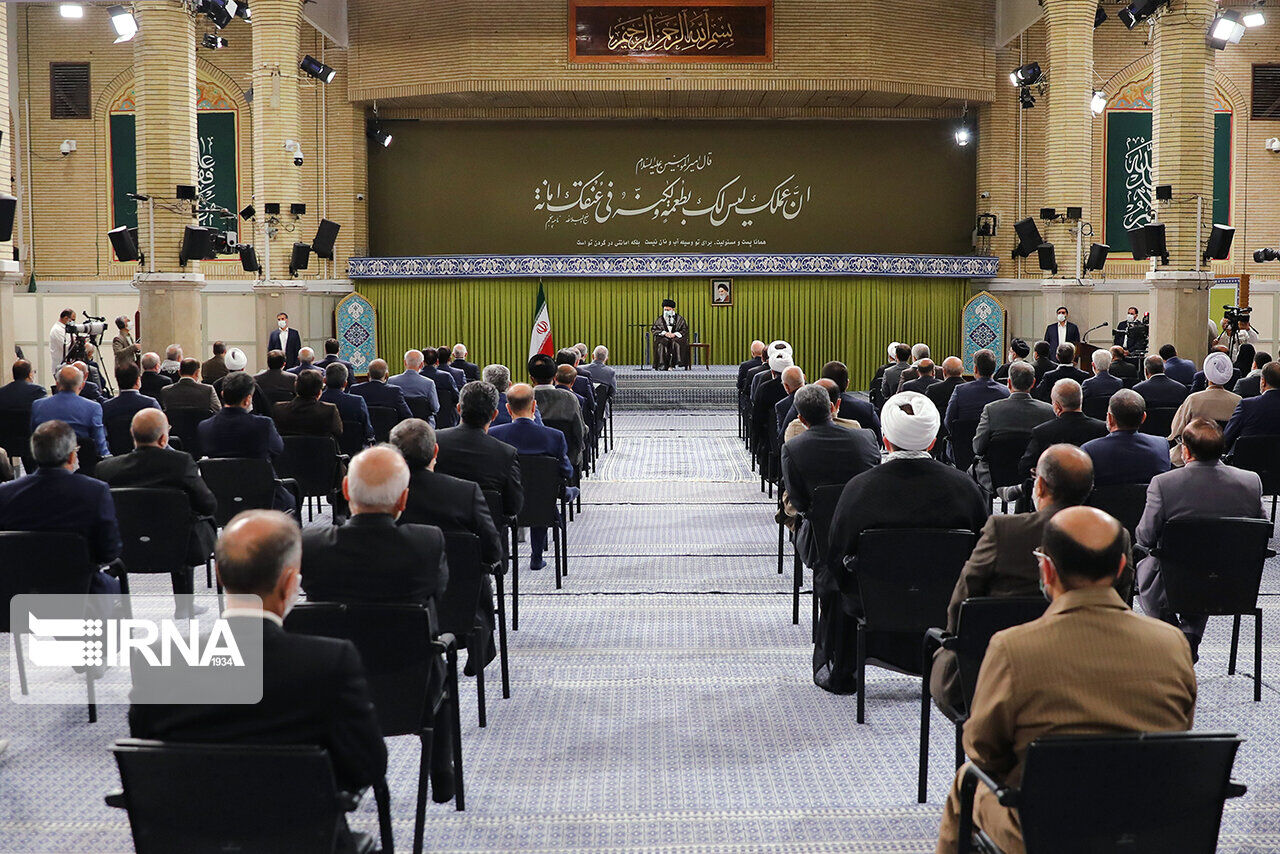 Headlines News Politics
May 26, 2022May 26, 2022 Zahra anniversary of the Conquest of Khorramshahr, Ayatollah Seyed Ali Khamenei

Leader of the Islamic Revolution Ayatollah Seyed Ali Khamenei met Wednesday with members of the Islamic Consultative Assembly (Iranian parliament) to address a variety of issues pertaining to governance.

Ayatollah Khamenei started off with the anniversary of “the Conquest of Khorramshahr” marked on Tuesday and described it as an example of turning a bitter equation into a sweet one.

He also extrapolated a general rule of how to overcome difficult situations from the conquest of Khorramshahr. To overcome tough situations, he said, one should rely on God, take initiative, have a long-term outlook and determination, and be altruistic.
“The liberation of Khorramshahr transformed a bitter situation into a sweet one. The Iranian nation was saved. This was due to their jihad, self-sacrifice, strong determination and having initiative. The spirit behind all these virtues was sincerity and reliance on God,” he said.

The Leader then pointed out how difficult is to run a country as large, populous, and diverse as Iran.

“Running such a country as dear Iran is important and, in the current circumstances of the world, naturally difficult and complicated,” the Leader said, noting the importance of the Majlis in running the country.

Underlining the important role that the Majlis (parliament) plays in running the country, Ayatollah Khamenei called on the lawmakers, even those who represent cities with fewer populations, to take into account the status of the Majlis and pay heed to the difficulty and complexness of running the country.

Ayatollah Khamenei pointed to several issues that are globally making it hard for countries to handle their affairs. Hostile competition among world powers and the threats of nuclear powers against each other, growing military threats and war in the vicinity of Europe, pandemics, and global food crisis are among the issues that are further complicating the management of countries, according to Ayatollah Khamenei.

These challenges are affecting almost all the countries around the globe.

In addition to the foregoing challenges, Iran faces multi-dimensional, continuous challenges due to its political system which rests on a combination of Islam and democracy, the Leader noted.

“A religious, Islamic democracy is a new idea. We have brought this into the world’s political literature. This is what provokes the animosity of the top powers in the world against this truth and phenomenon,” the Leader said, according to khamenei.ir.

The Islamic Republic is all in on confronting all kinds of hostilities and animosities. “And it is making progress and achieving success, notwithstanding,” the Leader said.

This is why the Leader called on all the three branches of government to appreciate the fact that they participating in a “great and important” management. Accordingly, they should take care of themselves in accordance with their status, the Leader emphasized.

Ayatollah Khamenei called on the authorities to correctly know the country’s capabilities and vulnerabilities so that they don’t make mistakes. “Because the enemy is pinning hope more on our mistakes than its capabilities,” he asserted.

The Leader also cited reasons why he called the parliament with its current cast of lawmakers “a revolutionary Majlis”.

He added, “The slogans of the Revolution are beneficial to the country, despite what some profess that the Islamic Revolution creates problems for Iran. No, it is the other way around. The Revolution and paying attention to these ideals are cures for the country’s sufferings.”