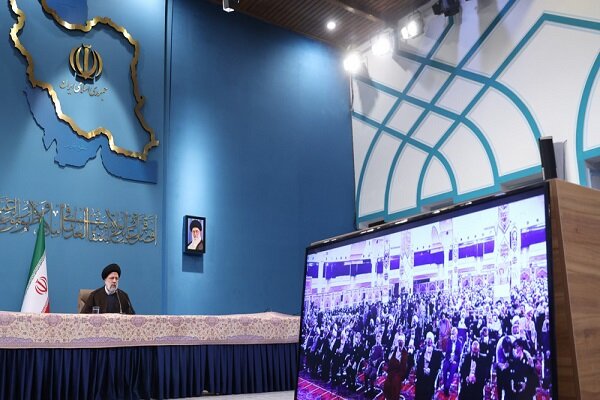 Headlines News Politics
May 25, 2022May 25, 2022 Zahra President Raisi, US sanctions against Iran

Iran’s President Ebrahim Raisi once again said that his administration will not tie the country’s progress to the removal of sanctions, reiterating that neutralization of the impact of sanctions is being resolutely pursued.

President Ebrahim Raisi made the remarks in an address to an event on Wednesday to commemorate 4,000 martyred clerics, according to the Press TV website.

Raisi said the martyrs’ blood carries the message of resistance against the enemies, protecting Islamic values, building the country, resolving people’s problems, forging unity, national cohesion, and adhering to the guidelines set by the leader of the Islamic Revolution, Ayatollah Seyyed Ali Khamenei.

“Just as we do not deem the enemy’s threats a hindrance, we do not [intend to] put off the country’s progress until the removal of sanctions,” he said.

“We have shown this in practice and announced through official tribunes that our strategy is that of the Leader, but at the same time we are pursuing the removal of sanctions as well.”

Raisi was referring to negotiations in the Austrian capital to persuade Washington to remove its illegal sanctions on Iran, four years after it unilaterally withdrew from the landmark Iran deal and launched a so-called campaign of maximum pressure against the Islamic Republic.

Raisi further said that a headquarter for neutralizing sanctions has been established and is actively engaged in efforts to deal with the economic difficulties faced by the Iranian people.

“Today, anyone who disheartens people with a stroke of their pen or with taking a step – whether intentionally or unintentionally and/or knowingly or unknowingly – is taking the enemy’s path, and if they take a step to hearten people, they are following the Islamic [Republic]’s path,” Raisi added.