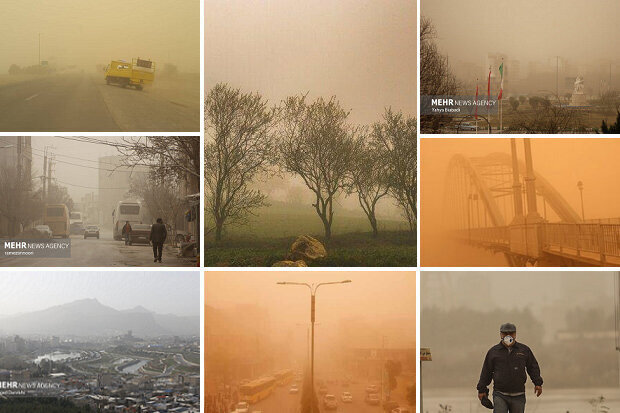 As Iran struggles with heavy dust and sand storms in various cities, there seems to be an urgent need for the West Asian countries to cooperate with Tehran to overcome environmental challenges.

Heavy sand and dust storms (SDS) have caused offices, universities, and schools to close in Tehran, Karaj, Kermanshah, and many other cities. It has also disrupted the daily lives of the Iranian people, causing them to stay at home and telework.

While the people of Khuzestan are suffering the most from the SDS, it is noteworthy that the lack of cooperation from the neighbors is playing a major role in the current environmental crisis.

According to Mohammad Jafar Montazeri, Iran’s Prosecutor General, building several dams over the Aras border river and constructing walls on the zero point of the border by Turkey has led to a spread of sand and dust storms into western and southern parts of Iran.

In a letter to Energy Minister Ali-Akbar Mehrabian, the Prosecutor General said it is necessary to follow up on the issue of receiving water right from the border river in order to prevent any further loss to the economy and agriculture of the region, IRNA reported on May 8.

Similarly, Turkey’s dam buildings over the Tigris and Euphrates rivers in Iraq have caused the desert-covered country to suffer from heavy SDS. The problematic issue here is that these dust and sand storms come from Iraq to Iran, thus disrupting normal life in the border province of Khuzestan.

Overcoming environmental problems cannot be overcome while each country is singing out of tone. Collaborating together is the only possible way to resolve the current crises. If Iraq, Turkey, Afghanistan, and Syria join hands with Iran and send environmental experts to consult on the matter and offer practical ways, this problem can be fixed.