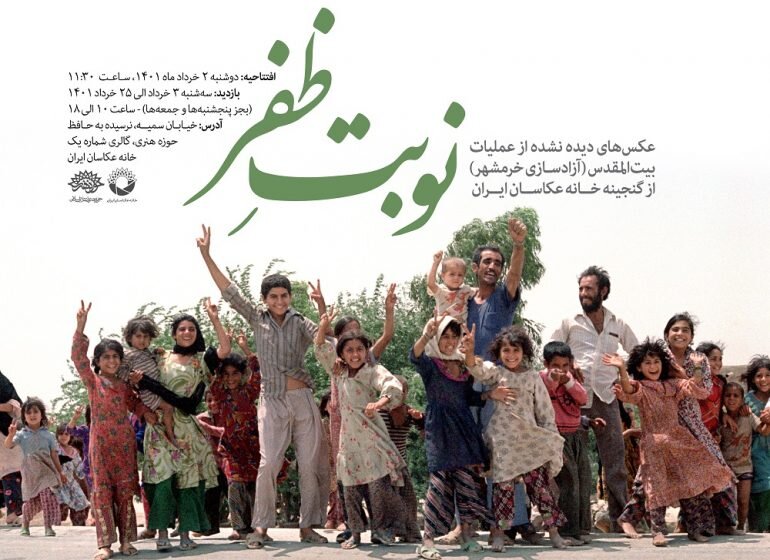 Two art exhibitions underway at the Art Bureau of the Islamic Ideology Dissemination Organization are celebrating the 40th liberation anniversary of Khorramshahr.

One of the exhibits entitled “Heavenly City” showcases a collection of never before seen paintings on the theme of the 1980-1988 Iran-Iraq war at Abolfazl Aali Gallery.

The Iranian Photographers Center (IPC) at the Art Bureau is also hosting an exhibition of photographs depicting scenes from Operation Beit-ul-Muqaddas that Iran carried out in 1982 to liberate Khorramshahr.

Sadeqi’s black and white photograph “Conquest of Khorramshahr”, which depicts Iranian soldiers celebrating the liberation of Khorramshahr at the Friday Mosque of the city, was sold for 750 million rials (about $18,000) at the 10th Tehran Auction in January 2019.

“Heavenly City” will be running until June 1 and “The Victory Turn” will continue through June 15.

“This celebration marks the liberation of a corner of our country, for which many people from children to women lost their lives,” said IPC director Ehsan Baqeri, who is also the curator of “Heavenly City”.

“Part of the collection depicts bitter moments before the conquest of Khorramshahr by Iraqis,” he noted.

“These photos, some of which are in black and white, represent parts of our modern history that can be reviewed again and again to help new facts be discovered about the war,” he added.

As part of its celebration for the liberation of Khorramshahr, the Art Bureau also unveiled busts of the Iranian soldiers Mohammad-Ali Jahanara, Mohsen Vezvai and Behnam Mohammadi, who were martyred during the Khorramshahr battle, in public places in the city on Tuesday.

Khorramshahr in the southwestern Iranian province of Khuzestan was captured by Iraqis on October 26, 1980, after the people’s 34-day-long resistance against the Iraqi invaders during the early months of the war.

The city was liberated on May 24, 1982, after it was totally reduced to rubble by Iraqis.