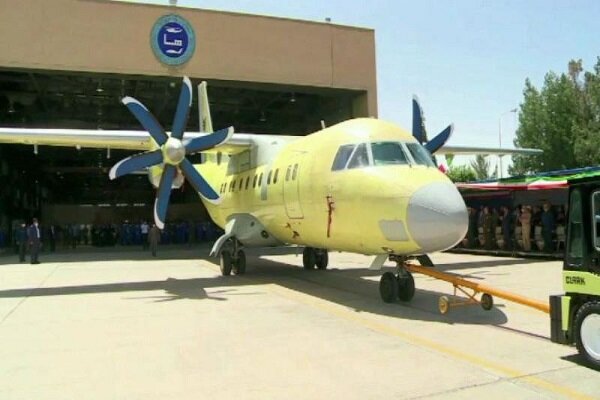 The “Simorgh” transport aircraft, built by the specialists of the Iran Aviation Industries Organization was unveiled in the presence of Iran’s Minister of Defense in Isfahan province.

Speaking at the unveiling ceremony of the Simorgh transport aircraft at Iran Aircraft Manufacturing Industries (HESA) on Thursday, Brigadier-General Mohammad Reza Ashtiani said, “Given the developments in the region and the threats against the Islamic Republic, aircrafts play an important role in the transportation of cargo, personnel, and support for the armed forces on battlefields.”

Ministry of Defence and Armed Forces Logistics of Iran, as a power-building, authorizing, and supporting organization of the Armed Forces has a great mission to increase the deterrent power of the Islamic Republic, the Iranian Defense Minister stressed.

Meeting the needs of the armed forces in various fields of land, sea, air, and electronic warfare is a key priority of the ministry of defense, he stressed.

Simorh transport aircraft is a redesigned and advanced version of the same generation, which perfectly fits the needs of the country and armed forces, Ashtiani said, adding that

Being equipped with high-tech, indigenous materials, the Simorh aircraft has been designed in accordance with Iran’s climatic conditions as well as international standards and regulations.