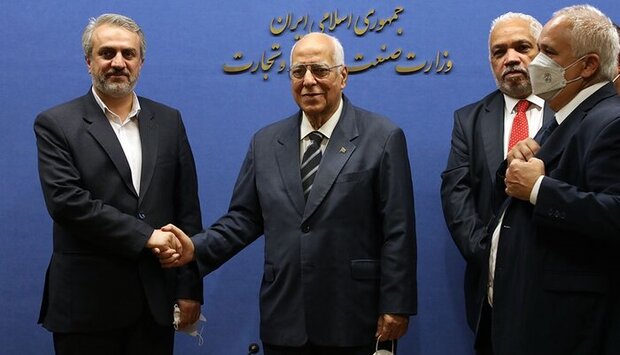 Iran and Cuba agreed to increase trade relations through the development of joint trade and economic cooperation.

Iranian Minister of Industry, Mine and Trade Seyyed Reza Fatemi Amin announced the development of 34 opportunities and grounds for joint trade and economic cooperation between Iran and Cuba in his meeting with Cuban Deputy Prime Minister Ricardo Cabrisas.

“We have made good progress in areas such as the pharmaceutical, mining and home appliances industries, which can pave the way for joint activities between the two countries,” he said.

Referring to Cuba’s cooperation with the Pasteur Institute of Iran in the field of vaccines, he added, “We can also increase trade relations between the two countries in the field of mining (steel, copper, aluminum, etc.).”

Fatemi Amin also expressed hope that the Cuban Deputy Prime Minister’s visit will be a turning point in expanding relations between the two countries.

Ricardo Cabrisas, for his part, stressed the need to increase bilateral cooperation in the economic field between Iran and Cuba, saying that the cooperation should be activated in the form of the 18th meeting of the Joint Commission of the two countries.

Barter, banking cooperation and issues related to mining and mineral industries and geology are among the fields that which the two countries can cooperate with each other, he said, adding that Iran can greatly help Cuba in the production and extraction of minerals (such as nickel, iron, lead and gold).

Heading a delegation, Cuban Deputy Prime Minister Ricardo Cabrisas arrived in Iran to attend the 18th meeting of the Iran-Cuba Joint Economic Commission which is slated to be held on May 15-17 in Tehran.

On the sidelines of the meeting, bilateral meetings will be held between Cuban and Iranian companies. The commission is set to hold 21 specialized committees in various fields, including trade, investment, transit and transportation, electricity and energy, oil and gas, customs, banking and finance, standards, health and other important issues.

Documents in the fields of medicine, agriculture, customs, food and vaccines will also be signed by the parties on the sidelines of the meeting.

The 17th meeting of the Joint Economic Commission of the two countries was held in Havana in December 2016.

The Cuban delegation is also scheduled to hold working meetings with top Iranian government authorities to review the state of economic, commercial and cooperation relations.