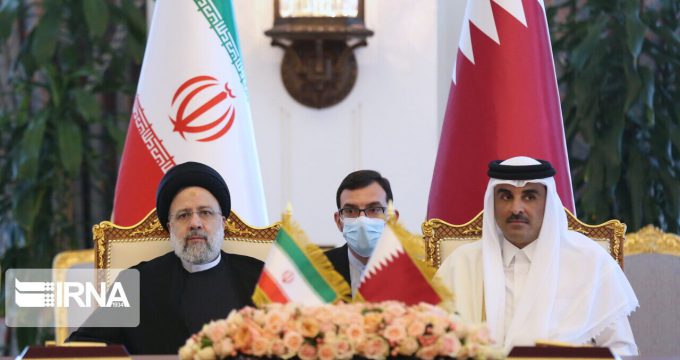 in a meeting with Emir of Qatar said that there are broad potentials for expansion of bilateral ties.

President Raisi in his meeting with Emir Sheikh Tamim bin Hamad Al Thani reiterated that the expansion of cooperation between Iran and Qatar would serve not only the two countries’ national interests, but they will also ease the existing regional tensions.

The Iranian president also referred to his successful official visit to Qatar late last March, and argued that the two countries’ relations are amicable and brotherly and that the Islamic Republic of Iran proved its friendship to its brother and friend countries, including Qatar during the tough years of sanctions.

President Raisi emphasized that the economic and commercial ties between the two countries need to be further expanded and strengthened, reiterating that a part of the reached agreements during his visit of Doha have already been implemented.

He said that in this official visit of Emir of Qatar, too, decisions will be made for maximum implementation of those agreements, especially on bilateral cooperation in tourism, goods transit, ports and navigation, energy, trade and commerce, and boosted investments, which have been made in recent months as a sign of Tehran and Doha strong will to expand meaningful relations.

President Raisi said that there are unique geographical, political and economic capacities in Iran that pave the path for regional coalitions to boost regional security and ensure the wellbeing of the regional nations.

He also voiced Iran’s will to end the siege of Yemen, the presence of s strong government in Iraq, exit of the occupiers and the terrorists from Syria, and establishment of an all-encompassing government in Afghanistan.

“Palestine is still the top priority of the Islamic world and the aggressive moves of the Zionist regime against the oppressed Palestinian nation need to end as soon as possible,” he added.

Sheikh Tamim bin Hamad Al Thani, for his part, expressed delight to be visiting Tehran, and reiterated that President Raisi’s recent visit to Doha marked a turning point in bilateral ties and opened a new chapter in Tehran-Doha relations.

“We are seriously asking for implementation of the entire agreements reached in your good self’s state visit of Qatar, especially in the commercial and economic field,” he said.

Emir of Qatar said that Tehran and Doha share viewpoints on many regional issues, reiterating that Qatar is ready to continue cooperation with Iran in resolving disputes in Syria, Iraqi, Palestine, Yemen and Afghanistan.

Sheikh Tamim bin Hamad referred to Iran’s significant role in crisis resolving in the region, adding that preservation of security and the prestigious lives of the regional nations and their rights to decide their own fates free from foreign intervention, which disturbs to lives of the nations are among the shared viewpoints of Tehran and Doha.

Emir of Qatar emphasized that the presence of a strong Iran is to the benefit of the regional peace and stability, and stressed the need to terminate the unjustly imposed anti-Iran sanctions.

“Iran has been opposed to any kind of invasion for over 40 years and resisted against pressure, as the western countries have confessed and emerged victorious in that campaign,” he said.

The two political leaders in their visit meanwhile reviewed the extent of progress in reached agreements and stressed the need to pursue the related projects till their full implementation.