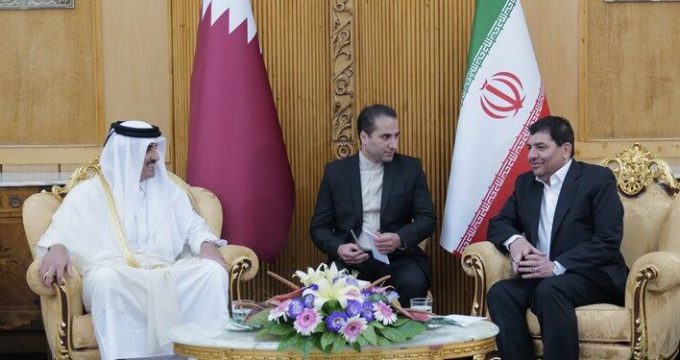 Emir Sheikh Tamim bin Hamad Al Thani who is in Iran for a one-day trip said in a meeting on Thursday with Iran’s First Vice President Mohammad Mokhber that he welcomes Tehran’s offer to cooperate on hosting 2022 World Cup.

Mokhber praised Qatar’s stances on regional and international issues, including Doha’s objection to the presence of the Zionist Regime in the region and yesterday assassination of Al Jazeera reporter by the regime.

He highlighted the role of Iran-Qatar relations in establishing peace and stability in the region and emphasized holding a joint commission for cooperation between the two countries.

Expansion of banking and trade relations between Tehran and Doha could facilitate the relationship between businesspeople and investors of both countries.

The Qatari Emir said that he has called on officials to identify cooperation grounds and pave the way for the economic ties between Iran and Qatar to reach a favorable level, referring to the upcoming joint commission meeting to be held in Doha.

He also said that his country has facilitated visa issuance for Iranian football fans to be able to attend the 2022 World Cup matches.